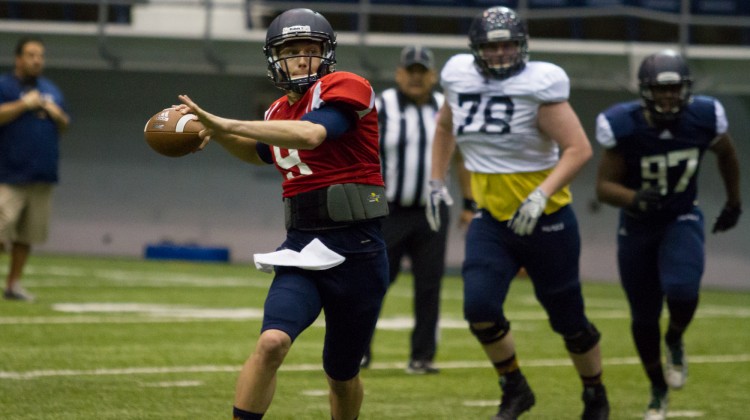 Story and pictures provided by NAU

The defense dominated the approximately 50-minute scrimmage period as it posted a 12-4 advantage in the scoring format utilized during the competition.  Defensively, the team was awarded a point for each three-and-out it posted and for each turnover and sack.  The offense received a point for a first down or touchdown.

The Lumberjack defense started out strong as they forced a three-and-out in the first series of plays when the top units on each side matched up.  The offense responded when the second units squared off as sophomore quarterback Connor Leavens hit sophomore receiver Brandon Porter over the middle for an 80-yard scoring strike.

Other top defensive plays in the scrimmage included an interception and tough pass break up by junior safety Jalen Cook, sacks by seniors Quentin Robinson and Jalen Goss and an interception by safety Elijah Orr.

Offensively, junior quarterback Case Cookus connected with senior wide receiver Emmanuel Butler for a big gain on a skinny post and then teamed up with junior running back Joe Logan for a nice gain on a short-side screen pass.

Sophomore defensive lineman Chauntez Thomas knocked down a Cookus pass at the line of scrimmage and junior cornerback Marcel Myers also tallied a physical pass breakup on one of the final scrimmage series of plays.

“It is not unusual for the first scrimmage that the defense is ahead of the offense, I think we saw that today.  I was really pleased with the energy that the defense exhibited with the exception of about two plays.  We are pretty consistent in rush coverage and run defense. Offensively, I was disappointed in some of the mistakes and we had some penalties.  We didn’t play with a kind of assertiveness that I would like to see us play on offense.  We still have some guys that are trying to figure out the new system and we are not ready for primetime, but that is why we have more practices.”

“The biggest thing when we finally get the pads on is working on our contact skills, being at pad level and keeping our leverage and actually blocking and tackling.  So much of what we do mimics the game, but isn’t actually the game.  When you actually get a chance to play football, you want to take advantage of it.  When we go 11-on-11 and everything is live and like it is going to be on game day, you want to bring your best, but we are not quite there yet.  We want to see all the drill work that we do in 1-on-1’s and all the small group drills translate into improvement when we go 11-on-11.  That is the key.  When the drill work translates into quality play in 11-on-11.  That is when you are making progress.”