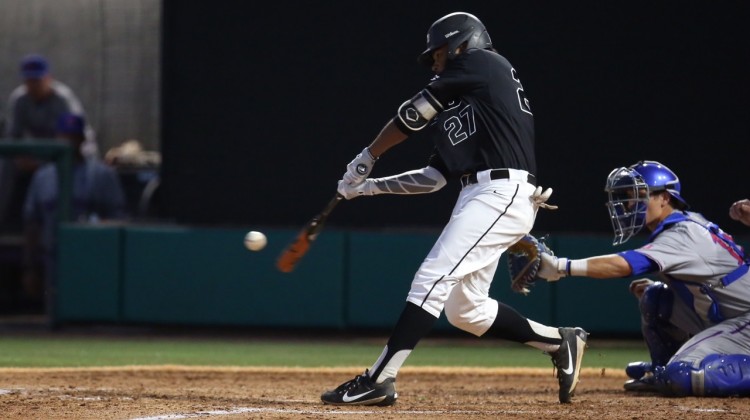 Grand Canyon University baseball is still working to find its team identity in 2018.

The Lopes are looking for the nine defenders that will take control of a game and make the crucial plays in pressure situations, GCU head coach Andy Stankiewicz said.

“We need guys stepping up, ready to make big plays,” Stankiewicz said. “We need pitchers that aren’t consumed with an umpire’s borderline ball call and just have enough toughness to say it doesn’t matter, I can throw a strike whenever I want to. It takes attitude.”

The Lopes are 7-13 after a midweek split against Kansas. On Tuesday GCU won 12-2. Wednesday, they couldn’t hold on to an early lead and fell to Kansas 6-5.

“Yesterday (Tuesday) we had some energy,” Stankiewicz said after the loss. “We played really good baseball, we minimized some possibly big innings, stayed out of trouble. Today we just flirted with disaster the whole game. We minimized some big innings on their part early, but it was like ‘Hey man, we better kick it into gear otherwise it’s going to come back and bite us,’ and that’s what happened.”

Stankiewicz referred to a big play junior center fielder Preston Pavlica made on Wednesday afternoon against Kansas, as an example of what he is looking for from his team in every game.

Top 7 | Kansas scores three runs but it could have been worse. Pavlica makes a diving grab to strand the bases loaded. GCU trails 6-5. pic.twitter.com/5uxbWtEoBK

“It was bases loaded and a guy hit the ball in the gap and he made a great diving play into left center,” Stankiewicz said. “You need that.”

Sophomore right fielder Quin Cotton has been one of the most dependable players for the Lopes in 2018. Cotton leads the team at the plate batting at .349 with four doubles, two triples, a home run and 17 RBIs so far this season.

“Cotton has come on and done a nice job for us,” Stankiewicz said. “He’s done a really good job hitting at the top of the order. He’s one of our most consistent hitters.”

Bot 3 | Credit Quin Cotton with two RBIs! A single up the middle and the Lopes grab their first lead of the game, 2-1. #LopesRising pic.twitter.com/1DZdC59GFz

The Lopes are still waiting for a few key upperclassmen to break out, which will be big in WAC play, Stankiewicz said.

“(Preston) Pavlica and (Zach) Malis are showing signs of coming up,” Stankiewicz said. “They’re both juniors, so we need those guys to get it moving offensively if we’re going to have a chance in conference.”

The Lopes begin WAC play against Chicago State on Friday. The key to success in the conference will be “playing really consistent baseball,” Stankiewicz said.

“We’ve got to a better job of pounding the strike zone and we’ve got to do a better job in the infield on defense,” Stankiewicz said. “We haven’t done a great job fielding the ground balls, making the plays when we needed to, so that’s going to be a difference maker.”

First pitch for game one against Chicago State is set for Friday at 6:00 p.m. at GCU Ballpark. Lopes’ ace Jake Wong is slated to start.