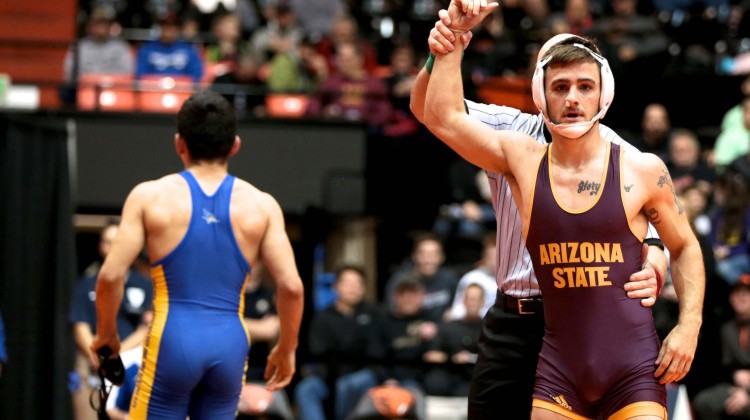 Sometimes a road trip is business and pleasure simultaneously.

Zeke Jones took a recruiting trip over the weekend to find the next group of Sun Devils who will can help the wrestling program progressing.

It was all about the business of continuing the plan he set in motion four years ago when he came to Tempe from the U. S. Olympic wrestling team.

It also meant that the eight Sun Devils preparing for the NCAA Championships in Cleveland got a bit a pleasurable respite for a few days.

“They didn’t need me standing over them, barking at that them,” Jones said before stepping on a plane heading to the Midwest. “There have been times were we probably overworked them. This is a good chance to recharge and be ready to go.”

The calm before the storm in the valley of the sun! pic.twitter.com/1SLMpjHmGP

By the time the Sun Devils step on the mat in Quicken Loans Arena on Thursday they will have had 17 days off in between competition – Pac-12 Championships and the NCAAs – so there was plenty of time to get the high intensity, grueling work that is done daily in the Riches Wrestling Complex back at the level it needs to be to finish off the 2018 season.

Arizona State is a strong candidate to finish in the top 10 and a really good performance could mean a top five finish for the first time since 2002-03 and seventh overall.

“They’ve had a good year, but we need to finish strong,” Jones said. “The brackets are what they are. Good or bad. We’re to the point where we are bad (for the opponent).”

The Sun Devils were certainly bad for the Pac-12 opponents when they returned from Corvallis with six champs, a runner-up and a third-place finisher.

They enter nationals ranked No. 10 in the nation behind four wrestlers ranked in the top 10 in their weight class including No. 1 ranked sophomore Zahid Valencia at 174 pounds.

Valencia finished third at the NCAA’s last season after losing in the semifinals to Penn State’s Max Hall, who went on to win the national title.

The two met in a preseason all-star match to begin this season and Valencia evened the series with an impressive 3-2 win with a late takedown. They both went undefeated in the regular season and are seeded No. 1 and No. 2 in Cleveland.

It appears Valencia and Hall, both sophomores, are on their way to another clash but there will be plenty of obstacles in front of them as they make their way through the bracket.

The rubber match is one of the mostly highly anticipated matches of the weekend.

“I was 0-1 against him,” Valencia said after the match. “Getting my revenge tasted pretty sweet.”

Should both wrestlers advance to the finals and coming running out of the tunnel on the national television (ESPN), Jones knows Valencia will be fine in the environment.

“He has been competing at an elite level since high school,” Jones said. “He’s wrestled for world titles. He doesn’t have an NCAA championship, and it has been one of his goals from a long time.”

Hall, who is 25 after a church mission delated the start of his career, is back at nationals after finishing as an All-American last season when he finished third as a seventh seed. After losing in the semifinals at the Pac-12s, Hall enters as the eighth seed.

“I came into the in a similar position last year,” he said. “I got a on a good run and came out of there as All-American. The goal now is to take it one step further.”

He has World and National champion Kyle Snyder of Ohio State in his half bracket, so a tough challenge is ahead.

“He had an extraordinary performance last year,” Jones said. “He has more wisdom and experience. He understands what it is like to prepare. He has a pro mindset.”

Shields has been competing at a different level this year after coming up of earning All-American status last year after a 1-2 performance.

He has a mentality, according to Jones, that would be in sync with the competitors in ancient Greece.

“Most people associate a combat sport with harm and danger,” Jones said. “You can run or fight. He’s a fighter. He has a gas tank that has no end. He’s going to break people to where they submit to him.

“The first Olympic game wrestlers was not about just danger. It was about chivalry, dignity and the battle. Josh loves that. He loves getting hit in the face or thrown on his head or when the body says don’t go and you have to fight through it. He loves those things and the sport. It’s not just a job; it’s a passion and he embraces that pain.”

Tsirtis had to overcome a different kind of pain that led him to Arizona State.

In the span of about month in 2015, when he was at Northwestern, his sister, Jillian was killed in a car accident and one his best, lifelong friends, Tyler, died of a heart attack.

“There is no possible explanation or description for how empty and confusing it feels to lose your life long best friend,” he said in a social media post. “Tyler truly has been so influential in my life, and he has been an instrumental figure throughout it.”

It led to a lack of focus and low grade in one of this classes. At Northwestern, that was unacceptable. He was put on academic probation.

Tsirtis chose to transfer and came to Arizona State without a scholarship or a ruling from the NCAA on whether he’d even be eligible.

He ended up getting both the eligibility and scholarship. It took some time to get back into wrestling shape let alone back to the level that saw him win a national title as a freshman and finish third as a sophomore.

Now, Tsirtis heads to Cleveland – much like the Sun Devils – wrestling better than he has in years.

“He made a leap of faith,” Jones said. “I couldn’t even give him a scholarship. He was on a long track back. His mind and body had gotten away from him. He came here with no guarantee. We all know his successful track record.

“His energy is good. He’s shown some good signs and he’s good enough to go win it all.”