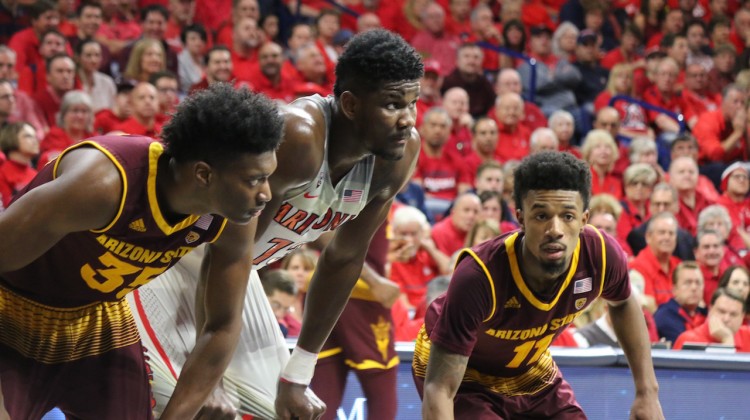 Arizona’s selection was in the NCAA tournament a sure-thing. Arizona State’s? The most debated in-or-out teams in all of the brackets.

The Pac-12 champion Arizona Wildcats are a four-seed in the South region. The Arizona State Sun Devils are in on of the play-in games as an 11-seed. If they can beat Syracuse, they will take on #6 TCU.

Questioning Arizona State’s participation in the tournament a mere three months ago would have been scoffed at. The Sun Devils were ranked as high as third in the nation after marquee wins against Kansas (the top seed in the Midwest), Xavier (the top seed in the West) and San Diego State (11-seed in the West). But after an underwhelming conference record of 8-10 and an opening round loss to Colorado in the Pac-12 tournament, the Sun Devils were very much on the bubble. But the Bobby Hurley’s crew, who were 20-11 overall and had an RPI of 66, beat out USC, who played Arizona in the Pac-12 tournament final was had an RPI of 33, and Saint Mary’s, who went 28-5 and held an RPI of 40.

“If you look at their wins, and again we look at the teams in the tournament, we look at the caliber of wins that a team has and they had a couple of outstanding wins early,” NCAA Division I Men’s Basketball Committee Chair Bruce Rasmussen said. “They had enough again on their resume that the committee felt that they needed to be in.”

Arizona also had a lot change since the beginning of the year. Some questioned whether the Wildcats were legitimate after losing three straight games in the Bahamas. But as Rawle Alkins returned to the lineup and Deandre Ayton emerged as a National Player of the Year contender, the Wildcats lost four more games all year. They sported a 27-7 record as well as winning the Pac-12 regular season and tournament championships.

Arizona State will play Syracuse on Wednesday in Dayton, OH at 6:10 pm. The Wildcats play #13 Buffalo in Boise, ID on Thursday.