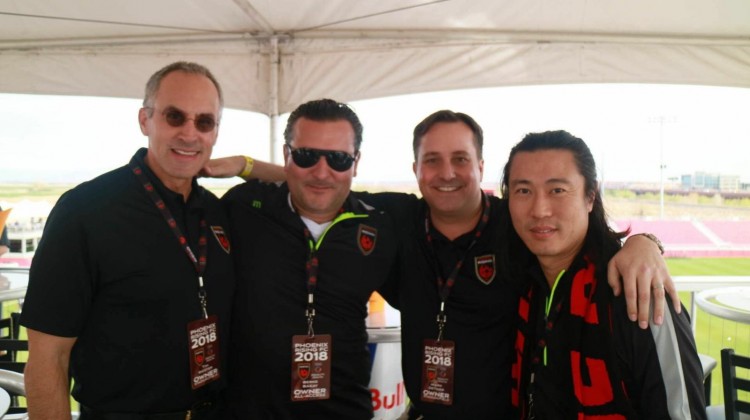 The trajectory of Phoenix Rising FC towards being granted a Major League Soccer club went into a different direction last week when the franchise announced a significant piece to their already stable ownership structure. Before I get into why the addition of Alex Zheng as Director of the Rising FC governing board is so important for fans of the team, let’s back up.

In 2012, Phoenix FC was born. The franchise played in the United States Soccer League(USL) and lasted all of one season, winning 5 of 26 games. Three ownership changes came within five months time leading into March of 2014. The franchise managed to stay afloat, but bounced between baseball stadiums in Peoria and Scottsdale for three years.  In September of 2016 I was the play by play voice of the USL soccer franchise, then known as Arizona United. A group of Valley businessmen purchased the team and quickly began the brick-by-brick process of rebuilding the trust of the few fans that had made it through the sea of constant change. I vividly remember seeing the current ownership go into the stands at Peoria Sports Complex and sit with fans in the final few games of that season. The loyal supporter’s I spoke with at the time openly wondered if the new group would stick together or  slowly fizzle away. The answer to that question has been answered in a big way. The deep and diverse group of Rising FC owners have all stayed in their lanes, no more games in empty baseball stadiums, and Major League Soccer has taken notice to the point of  Rising FC being a finalist for an expansion franchise to be granted later this year.  However, there was one missing piece to the ownership structure of the franchise. That’s where we pick up the story of Alex Zheng and his significance to soccer in Phoenix.

Last Saturday I sat with Zheng before the teams friendly against Sporting KC. In our 25 minute conversation from the roof of the owners suite at the stadium he spoke about his journey to Rising FC and how it all led back to synergy. He points out through his interpreter(he speaks some english during our visit) that the initials to his holding company are ASU. (Advantage Sports Union). All documents he signs are with his initials, AZ. His daughter was born here back in 2015 and he has purchased property in Phoenix. All were signs to him that he should be doing business in Arizona.  He met the Phoenix ownership group in-person for the first time just five weeks ago, but had been doing extensive research and analysis  of the U.S.  soccer market through Advantage Sports for several months. “I was very impressed with the ownership group, they were professional and supportive of the team and the soccer market,” Zheng said.

He has an extensive and impressive resume when it comes to the business of soccer. Along with his company, Zheng is a significant investor of a  French Premier League 1 professional soccer team OGC Nice who qualified for participation in the 2017/18 Champions League. He made his mark initially through hospitality and tourism. Zheng created one of the largest hotel chains in Asia, building 3,000 properties in 10 years, with over 300,000 rooms. His financial standing gives Rising FC a rock-solid portfolio in their bid for MLS later this year.

We finished our conversation with a chuckle. Being a global entrepreneur, Zheng said he’d like to find direct flights from Hong Kong to Phoenix. Right now it’s Hong Kong to Dallas to Phoenix. His addition to the ownership group is another positive sign for the fans who have patiently waited for Major League Soccer.  I came away extremely impressed with Zheng and what he is bringing to Phoenix.