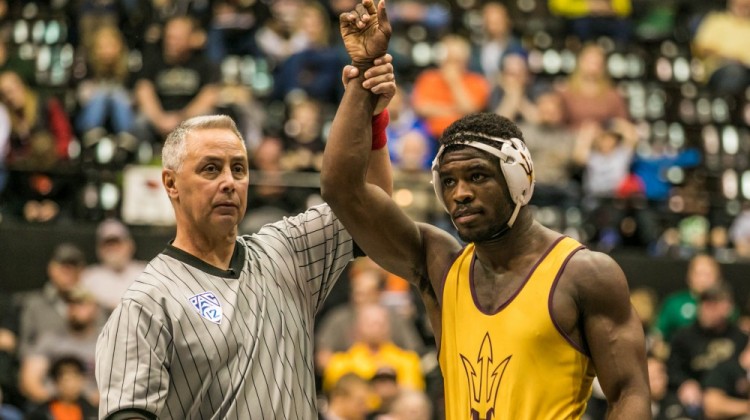 Anytime you win back to back college conference championships, fans of that sport take notice. The Sun Devils won their second Pac-12 title in as many years Sunday night in Corvallis, Oregon. I met up with head coach Zeke Jones less than twenty-four hours later at the Living Room in Ahwatukee. Jones was a guest of longtime Sun Devil booster Nap Lawrence. It’s truly a remarkable achievement what Jones’ team has done. They will be sending eight qualifiers out of ten weight classes, which will put them in the top ten schools in the country for qualifiers to NCAA’s. The NCAA Championships are March 15-17 at Quicken Loans Arena in Cleveland. Here’s just a few highlights from our nearly twenty-minute conversation on Monday.

How would you describe the last twenty hour hours, since winning the title?

“It certainly feels good, over the last day and day and a half. The team,the community, Arizona State certainly needs to relish in the moment. I also think too that, keeping in perspective, it’s time to move on”.(Upcoming NCAA Championships)

What struck you most about the weekend?

“Kordell Norfleet, true freshman, 184 lbs. Winning the Pac-12, qualifying for the NCAA’s. Not that I was shocked, or surprised, I was pleasantly happy because you never know what a true freshman is going to do.”

Who has not gotten enough attention since you won? He answered this one without ANY hesitation.

“Josh Shields, he’s 30-2, ranked number three in the country, Valencia is our monster who deserves all of the attention, Shields a little tortise-hare, he’s going to be the kid that comes every day ready to work, loves the sport and has the passion, he’s very soft-spoken/mild-mannered who doesn’t need the spotlight. Josh Shields is going to be competing for a national title this year.