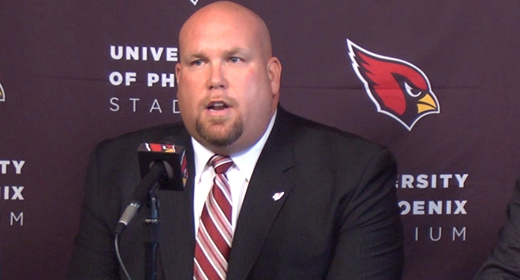 The following statement came from the Arizona Cardinals on Monday afternoon:

The Arizona Cardinals Football Club today announced that the team has signed General Manager STEVE KEIM to an extension that keeps him under contract thru 2022.

Keim recently concluded his 19th season with the Cardinals and fifth as the team’s General Manager after joining the club as a college scout in 1999. He was promoted to General Manager on January 8, 2013 after previous promotions to Director of College Scouting in 2006, Director of Player Personnel in 2008, and Vice President of Player Personnel in 2012.

Since his promotion to GM, the Cardinals have a 49-30-1 record in the regular season, the seventh best winning percentage (.619) in the NFL since 2013. The 49 wins the past five years are the most in any five-year span in franchise history. Since 2013, only four of his NFL counterparts have won more regular season games than Keim (New England’s Bill Belichick, Seattle’s John Schneider, Pittsburgh’s Kevin Colbert, Denver’s John Elway).

“Steve’s performance and accomplishments as Cardinals GM speak for themselves,” said Cardinals President Michael Bidwill. “His role in the team’s success over the last five seasons is undeniable. This new contract ensures that he will continue to shape our success going forward and we are thrilled about that.”

The teams put together by Keim during his tenure as GM have been some of the most successful in franchise history. In 2014, the Cardinals tied the franchise record for wins in a season (11) before setting a new mark the following year in 2015 with 13 wins and its first-ever postseason bye.