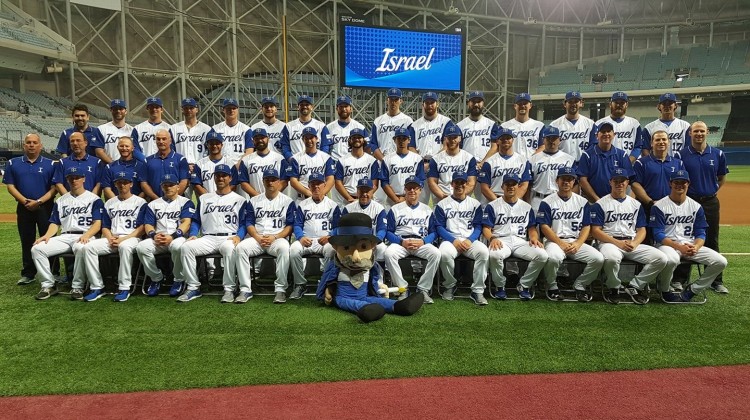 Since he was a child, Jonathan Mayo has had an obsession with learning about Jews in baseball.

He idolized the Jewish superstars of the game such as Hank Greenberg and Sandy Koufax. Mayo was determined to uncover the stories of the Jewish players who are not just a minority in the world, but in baseball as well.

Today, Mayo is one of the lead writers for MLBPipeline.com and his obsession remains persistent.

His desire to study the small population of Jewish players led him to begin a journey with three friends from Jewish sleep-away camp. Seth Kramer, Daniel A. Miller, and Jeremy Newberger, of Ironbound Films, embarked on this journey with Mayo to create Heading Home: The Tale of Team Israel.

“Jeremy and I have been talking for the last eight or nine years trying to think of a project to do together that really made sense,” Mayo told Sports360AZ.com. “And then I had this idea of, ‘what if we brought a group of Jewish baseball players to Israel?’ That’s what the idea was, initially. Kind of like a baseball birthright.”

Mayo and the Ironbound crew planned to follow 10 Jewish-American players to Israel after team Israel’s World Baseball Classic qualifying tournament in Brooklyn, New York. Little did they expect Israel to make it through the qualifying round and into their first WBC.

Within a matter of days, Team Israel began its Cinderella story and gave the film a deeper meaning.

“We couldn’t quite get all the pieces together,” Mayo said. “Then, Team Israel qualified for the World Baseball Classic and there was new life into the project.”

The film, which shows at the Harkins Park West Peoria Theater on February 13, highlights team Israel’s trip to the homeland of the Jewish people and their triumphant victories during the WBC against baseball powerhouse nations such as Korea, Chinese Taipei, Kingdom of the Netherlands and Cuba.

“A great baseball story transcends the sport and people who don’t care for baseball much can appreciate it,” Seth Kramer, co-director of Heading Home, told Sports360AZ.com. “The film is a real baseball story and it coasts on the classic story of a group of underdogs who were playing against all odds.”

Team Israel’s roster during the 2017 WBC was not one that intimidated its opponents. Only a handful of players on the team have had Major League experience including former Chaparral High and Arizona State star Ike Davis, Sam Fuld, Josh Zeid and Ryan Lavarnway. Only a couple members of the team were Israeli passport-holding citizens.

World Baseball Classic rules allowed Jewish-American player to be a part of team Israel because of their Jewish lineage.

Kramer said this aspect of the team made the group and their story special.

“It’s funny because you would never assemble a team like that,” Kramer said. “You would never say, ‘Okay let’s find every Jewish player we can think of and have them come play.’

“You have a lot of these American-Jewish people who don’t view Israel as their home, but they view it as a great symbol of all our homes. They identified themselves as a universally Jewish baseball team.”

The pilgrimage to Israel gave the team’s core group of players new perspective on what it meant to wear the nation on their chest and a Jewish star on their hat.

Israel’s starting catcher in the WBC, Ryan Lavarnway, said the trip made everything more meaningful and helped the players build a connection on and off the field.

“Getting to see the country and the history and the people, you could kind of feel the importance,” Lavarnway told Sports360AZ.com “It absolutely changed everything for me and it also bonded us tighter as a group.”

The group of American-born players connected on a number of levels. Each player understood the professional situations of their teammates as well as their upbringings.

“We all kind of felt like we knew each other,” Lavarnway said. “A lot of us never even met but we felt like we understood each other’s circumstances being raised in mostly Jewish households. None of us were big superstars in the game. We’ve all been up and down so, we all understood the struggles each of have been through in the game as well as being a minority in the clubhouse.”

Despite the new bond that formed amongst the players, the film crew didn’t know what to expect going into the first round of the international tournament.

“The first game they played in South Korea was against South Korea,” Kramer said. “It was almost terrifying; you felt like you were in a Roman coliseum. The noise level was out of control, the fans were just rabid, you thought team Israel was going to lose just from the volume of the cheering.”

Israel went a perfect 3-0 in the first round and continued its inspirational run without much support from the outside.

“Here in the states you had writers calling them a group of has-beens and never will-bes; there were no expectations,” Mayo said. “On the other side, you had the Asian media during the first and second rounds calling them JV or the second team for team USA.

“The team was caught in the middle of this and they were under-appreciated because even if these guys were the quote-on-quote has-beens, all have been playing baseball – some in the big leagues. They weren’t guys taken from some beer softball league. To underestimate what they could do was a mistake.”

After the team’s juggernaut performance in pool A of the first round, their dream of securing a WBC championship came short. Israel went 1-2 in the second round with losses to Japan and The Kingdom of the Netherlands.

Despite leaving the WBC without a trophy, Israel exited the tournament with a sense of pride and a feeling of accomplishment by way of the impact they would have on the game of baseball and the nation of Israel.

“This supported all Jewish kids who dream of playing baseball and showed them what that looks like and what it can look like some day,” Mayo said. “There can be that many players who are not only willing but proudly wear Israel on their jerseys and a Jewish star on their hat. I think that impact is almost immeasurable and it’s going to be incremental in Israel, I think, and the movie captures it all.”

Giving Back to Israeli Baseball

Lavarnway learned that there was only one baseball field in the entire country of Israel. There are kids playing on blacktops and soccer fields – wherever they can find space.

While team Israel would have loved to win the World Baseball Classic, Lavarnway said the team only hoped to have an impact on Jewish and Israeli players around the world.

“Our goal as a team was to inspire and grow the game around the world,” he said. “We hope that there is a full team of Israeli passport-holding players playing for team Israel instead of American Jews.”

The impact was in full force almost immediately. Lavarnway met with Peter Kurz, the president of the Israel Association of Baseball and general manager of team Israel, in Colorado to discuss ways to continue the baseball movement in the country.

The IAB will take a portion of tournament earnings and gather donations from the Jewish National Fund to build two more fields in Israel. The goal is to build at least one full-scale field with the hope of hosting an international tournament in the future.

“We need about another million and a half dollars, which is not a lot of money,” Kurz told Sports360AZ.com. “We are looking for our Bob Kraft (owner of the New England Patriots). He built football stadiums here in Jerusalem because he is a big supporter of American football in Israel. We are looking for our baseball Bob Kraft. We’ve spoken to about five or six baseball owners but we’re hoping this movie can help.”

Kurz said since the WBC, he has had an overwhelming outreach from both Jewish and Israeli players.

“I get more and more people who are turning to me and sending me emails saying, ‘I have a fifteen-year-old kid. We’re two Israelis who came to America 25 years ago to work here and our son was born and raised here but he has an Israeli passport and can play for team Israel. Can he play for the WBC team?’ Kurz said. “We’re getting more inquiries from American baseball players who have Israeli passports.”

Since Kurz began his tenure with the IAB in 2013, the organization has seen a 40% increase in participation. Kurz’ plan is to assemble a full team of Israeli passport-holding players with hopes of qualifying for the 2020 Olympic games in Tokyo.

There will be one team representing Europe during the summer games. Israel belongs to European baseball.

Not only did team Israel have an impact during the WBC, but the experience of representing the No.19 ranked baseball country in the world had an impact on the players.

When thinking about the future of baseball in Israel, Lavarnway doesn’t see anything holding the country back from making more benchmarks.

“I don’t see any reason why we couldn’t have more success,” he said. “I hope the success we had inspired more and more people to volunteer to play for this team.”

Despite his belief that baseball is a hard sell in Israel, Mayo also believes there can be a bright future for Jews and Israelis in the game.

“I can see the trickle-down effect being these kids who play baseball, who didn’t think they could do well, seeing the success Israel had and them saying, ‘I’m going to work a little harder, I’m going to keep going.’ Mayo said. “I think it will have an impact in terms of numbers in the game.”

The success of team Israel will be used as a keystone in the advancement of baseball in the nation. The future of the game in Israel looks bright, as shown through the camera lens in Heading Home: The Tale of Team Israel.

See the documentary on Team Israel and their journey on Feb. 13 at Harkins Park West Peoria Theater.