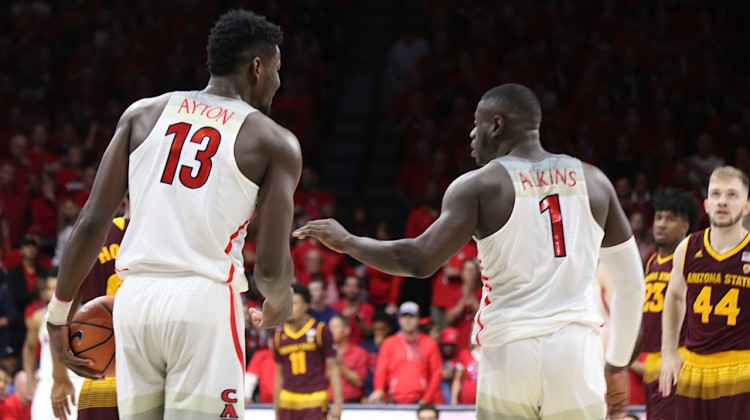 The second 2017-18 men’s basketball version of the Territorial Cup will have an extra intense feel Thursday night when the 17th-ranked Arizona Wildcats and 25th-ranked Arizona State Sun Devils tip-off inside Wells Fargo Arena. For the first time in several years both the ‘Cats (20-6, 10-3 in Pac-12) and Devils (19-6, 7-6) are likely headed to the NCAA tournament next month.

So who has more to gain with a victory against their in-state rival?

“From a big picture standpoint it’s big for both,” Pac-12 Network analyst and former UofA shooting guard Matt Muehlebach said to Sports360AZ.com’s Brad Cesmat Wednesday morning. “UofA has a team I think, at least personnel-wise…you could be talking about a Final Four team. I think [for ASU] establishing themselves with Bobby Hurley…that’s big.”

Duel in the Desert 🌵 pic.twitter.com/YBYaoumBiQ

ASU comes in riding a three-game win-streak following a sweep of the southern California schools last weekend, while UofA has lost two of their last three but continues to lead the conference, sitting two games up on UCLA and USC.

Muehlebach says ASU, whose non-conference resume includes impressive wins over Kansas, Xavier and Kansas State, would benefit greatly from a high-profile conference win over a Top 20 team like Arizona.

For Hurley’s squad, priority number one will be trying to slow down sensational freshman DeAndre Ayton who has been impressive averaging 19.5 points, 10.7 rebounds and close to two blocks a game.

“He’s a once-in-a-generation guy,” Muehlebach explained. “The big thing for him is understanding he can dominate. Understanding that he can go out and get 25 [points] and 20 [rebounds]. They’ve got to look [to get him the ball] more.”

The well-respected analyst expects an up-and-down, high-scoring game between two of the top scoring teams in the Pac-12. ASU leads the conference in scoring (85.0), while Arizona is third at 81.8 points per game.