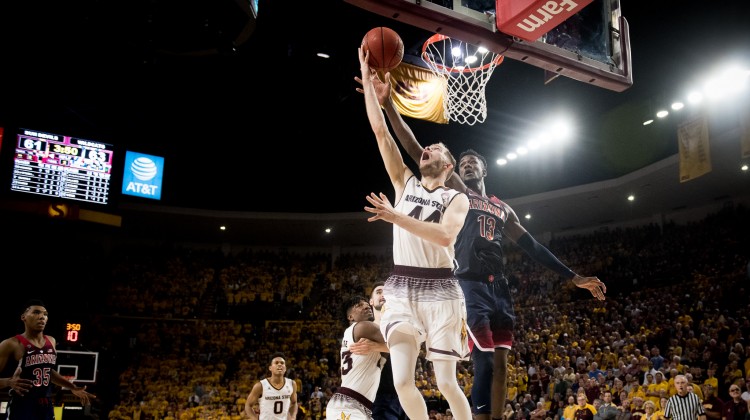 Did you watch DeAndre Ayton take apart Arizona State Thursday night? Do any of us need another reason to see why the Phoenix Suns should go out and lose every single  game that they have left in this miserable season? The Wildcat big man scored 17 points and grabbed 14 rebounds in the SECOND HALF in the Wildcats 7 point win. He would finish with 25 points, 16 rebounds, 4 assists and 3 blocks. Those are just the stats. You can’t measure his impact on the floor. “After competing against him twice, he may be the best big that I’ve seen in college, as a player and as a coach,” said ASU head coach Bobby Hurley. “In terms of his future and his upside, he’s just scratching the surface. It’s hard to imagine what he’ll be.”

Years from now there will be thousands who will claim they were in the building to see Ayton make his one and only college appearance in Tempe. It was a performance that should make Suns owner Robert Sarver bring in his entire basketball staff and order them to avoid winning a game the next two months at any cost. “He doesn’t get that tired either,” said Hurley. “We had him on the perimeter, running him around on ball screens. He holds his own away from the basket on defense. You can’t push him away.”

NBA people compare Ayton to Tim Duncan. I compare him to no one, because his frame looks like it can’t still add bulk. He’s an absolute beast right now, what will he be after a couple of seasons at the next level?

I understand that players on a NBA roster are trying to compete, but this is a business. It’s in the best interest of the Suns to finish the job that they started at the beginning of the season. “Just Lose Baby” should be the motto. Bring back “Trophy Guy” and have him or her dance around in front the sections of empty seats in downtown Phoenix every time the Suns lose another game. It’s time to go all-in on the DeAndre Ayton sweepstakes.

May 27th, 2010 was the last time the Suns had a playoff game. Stinking up the joint a few more nights here in 2018 to give the paying public a glimmer of hope for Ayton should be the number one goal. Anything else just continues the madness of the last 8 years.