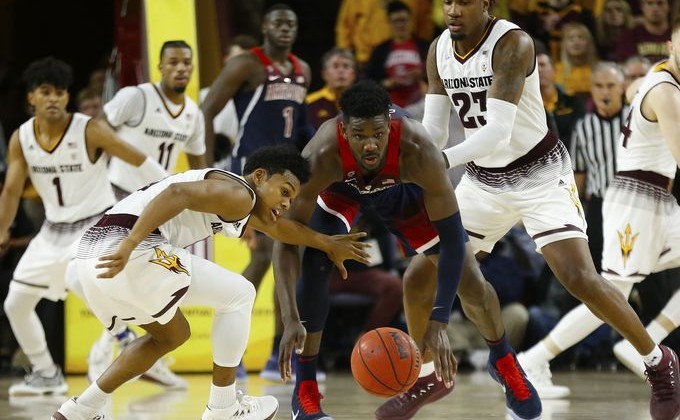 In one of the most anticipated Territorial Cup men’s basketball match-ups in recent memory the Arizona Wildcats made the big plays down the stretch and held on for a 77-70 win over Arizona State in front of a sellout crowd inside Wells Fargo Arena. With the win the ‘Cats improve to 21-6, 11-3 in Pac-12 play. The Sun Devils drop to 19-7, 7-7.

Here are five things we learned Thursday night in Tempe.

1. High Level Hoops…Barring a late-season collapse from ASU both of these teams will be playing in the NCAA tournament next month. They certainly looked the part in one of the more memorable games inside WFA in recent memory. After the Wildcats stormed out to a double-digit lead on 10-12 shooting from the field, the Devils went on a 16-2 run to pull within a point at halftime. The second half featured much of the same with each team making keys offensive plays in timely moments.  “I feel like we emptied the tank,” ASU head coach Bobby Hurley said. “I think it was an entertaining game to watch. It was a fun game to be a part of.”

2. (De)andre the Giant…The good news for ASU fans is the next time Deandre Ayton plays in the Valley it will be with an NBA team. The ridiculously talented 7-foot, 250-pound freshman made his presence felt early swatting away a shot and then sprinting the length of the court for a layup. “He’s a special player,” Hurley said after the game. “After competing against him twice he may be the best big (man) I’ve seen as a player and a coach. He’s just scratching the surface of what he’ll be. He’s got such a great future.” Ayton became more aggressive in the second half attacking the offensive glass for put-backs or setting up teammates when ASU double-teamed him in the post. He finished with game-high in points (25) and rebounds (16). He also added four assists and three blocks.

3. It’s Miller Time…Credit Arizona head coach Sean Miller for focusing the Cats’ second half offense inside the paint where Ayton and senior Dusan Ristic proved too much to handle for ASU’s bigs. The twin towers combined for 37 points and 26 rebounds (12 offensive). The Sun Devils had 28 rebounds as a team.

4. Justice Is Served…Senior guard Kodi Justice, who has struggled in recent weeks offensively, helped shoot the Devils back into the game in the first half igniting the crowd with a pair of deep three-pointers and hustle plays at both ends of the floor.“We competed but we have to find ways to not dig holes early,” Justice explained later. “It’s basketball. It’s a learning process. We’ll always be a learning team through wins and losses.” He was one of ASU’s most consistent offensive threats and finished with 19 points on 7-14 shooting, including 4-9 from three-point range.

5. Absent Alex…Former Tempe Corona del Sol star Alex Barcello dressed but did not see any game action against his hometown team. The freshman guard has played in only two of the last 11 games (lopsided wins at Cal and Washington State). He had been hampered by a sprained ankle in early December but has been fully healthy for several weeks. He’s averaging just under three points a game.