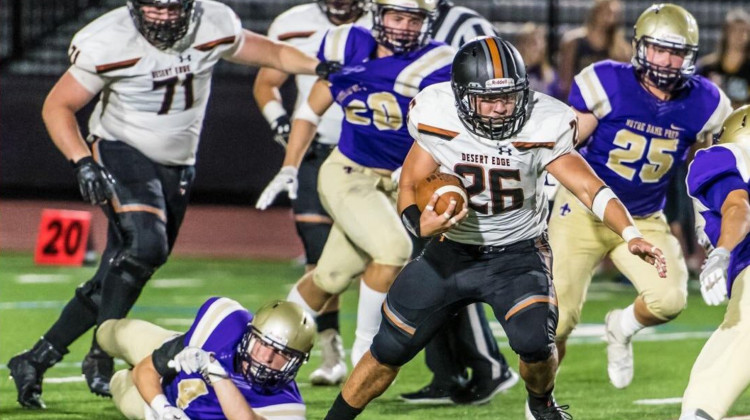 Desert Edge High running back Rocky Perez announced he has chosen Ottawa University to continue his academic and football career for the next four years.

Perez has averaged over 1,000 rushing yards for three years back-to-back and will graduate with 3,690 total rushing yards in his high school career.

“He’s a very strong running back, runs extremely hard, has great vision,” Scorpions’ head coach Jose Lucero said to Sports360AZ.com.  Once he gets the ball in his hands he does a good job at finding holes.”

Perez took a visit to Ottawa’s west Valley campus and football facilities in January and accepted their offer a few weeks later.

Proud to announce my commitment to @OUAZFootball S/o to @CoachRobertBala for believing in me… Let’s get to work.🏁 pic.twitter.com/cJT7Vxmgjr

Lucero said Perez showed flashes of greatness dating back to early in his sophomore season against Paradise Valley.

“He really had to carry the load in the second half a lot and showed us a lot that game,” Lucero said. “It’s one that sticks out to me. He stepped up big from that point moving forward.”

The 18-year-old works hard on and off the field, putting the student aspect first in student-athlete.

“One of the main things that made Rocky so recruitable this off-season is that he’s a 3.4 GPA kid and got a 22 on his ACT,” Lucero explained.

Very proud of these four guys!! All signed and will be playing at the next level!!

Perez says he plans to major in Sports Management or Business and is interested in one day being a sports agent or owning his own clothing line.

The Ottawa commit is most excited about the “new challenges and opportunities through the university and the challenges of transitioning into an adult as well,” said Perez to Sports360AZ.com.

The Spirit, who play at the NAIA level, will kick off their inaugural season of football this fall under head coach Mike Nesbitt.