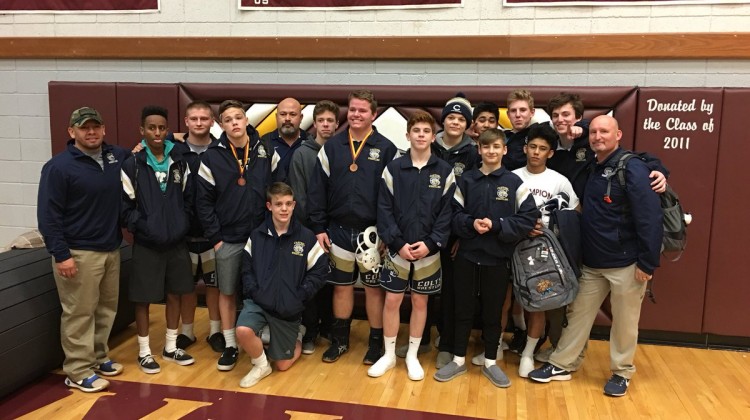 In the bottom right drawer of his office desk, Casteel wrestling coach, Bob Callison, has a stack of thank you cards and letters from former wrestlers and their families.

Callison considers it a great honor to have received these.

On January 17, 2018 Callison was informed of another honor he would be given to commemorate his 20-plus years of coaching Arizona high school wrestling.

Callison broke the news on twitter that he would be inducted into the Arizona High School Athletic Coaches’ Hall of Fame.

I was honored and blessed today to get the call that I will be Inducted into the AZ High School Athletic Coaches' Hall of Fame class of 2018. So thankful to all the wonderful wrestlers,parents, families assistant coaches,school coaching staffs and AZ USA Coaches that have helped

The AZ Coaches’ Hall of Fame inducts approximately five coaches every year. The inductees have coached in Arizona for 20 or more years in one or more sports with unparalleled success.

The soon to be inductee began his high school coaching career at Bradshaw Mountain (Prescott Valley) until he and his wife decided to move to the East Valley due to the birth of their first child.

After moving to the East Valley, Callison coached at McClintock (Tempe) before his arrival at Mountain View (Mesa) where he coached for over a decade and led the team to back-to-back state titles in 2014 and 2015.

Callison departed from Mountain View in 2016 and has been coaching at Casteel (Queen Creek) since the school opened that fall.

His decision to accept the job at Casteel was based on his son entering middle school there and wanting to wrestle at the school.

Despite the many schools Callison has coached and taught at, his passion for leading young wrestlers started before he landed his head first head coaching job in Arizona.

While student teaching, he helped a youth wrestling club win its first tournament in over 25 years.

Once Callison got his first taste of victory as a coach, his goal was to win as many championships as he could and impact kids through his coaching, similar to the way coaches, including his high school coach John Nell, had an impact on him.

“(Nell) was a good man, a role model, and I wanted to coach because of him,” Callison said. “I wanted to influence my students, and my wrestlers the way my coaches influenced me.”

Callison said he has learned many lessons from Nell that he translates to his everyday life, lessons that he embeds into the minds of his wrestlers, students and children.

He recalls a match in high school when he started to coast because he was beating his opponent with seconds left on the clock. Rather than wrestling to the end, the young Callison began to watch the clock to assure himself he had a victory secured.

“He was on me,” Callison said. “He said, ‘Don’t look at the clock. I don’t ever want to see you look at the clock again. I’ll tell you when times up—wrestle through the whistle.’ Looking back, that was a life lesson.

“How many times do you hear people say, ‘Oh, well I have time.’ I always have wrestlers tell me they’ll come out next year,” Callison said. “No. You do it now, and I learned to not look at the clock. I think as a coach and as an educator, you put in a lot of time and the fact of the matter is you get the job done and you can’t be concerned with the time.”

Callison prides himself by helping his students and wrestlers grow as leaders in addition to building good relationships. The relationship aspect of a successful team stems from a lesson he learned from Don Wilkinson, the district athletic director during Callison’s time at McClintock.

Casteel Athletic Director, Ryan Ridenour, said coach Callison has had a great impact at Casteel and his induction into the hall of fame does not come as a surprise.

Thankful for Chase Klapperich’s optimism as Wrestler of the week last week pic.twitter.com/yMSdDNVe03

“Coach Callison is an unreal person,” the Casteel AD said. “Being inducted into the Arizona coaches hall of fame does not come as a shock.  He is one of the best I have ever known and makes our staff and me better.  It couldn’t have been more fitting.”

Ridenour, who is one of the first people Callison told about his honor, said the coach has been deemed the Godfather at Casteel because of his experience and demeanor.

“He has been there, and done that, wherever there is and whatever that is,” Ridenour said. “He is the definition of steady and well respected by all.”

Despite being the newest member to join the distinguished fraternity of the greatest coaches in Arizona high school history, Callison never had the goal to be a member of the group.

Rather than his call to the hall, Callison’s feeling of achievement comes by way of the outreach from his current and former wrestlers.

“We don’t get paid the million dollars teaching and coaching but, the rewards of those young men and the thanks they’ve given me – that worth a million,” he said.

Throughout his coaching career, his connection to athletes often made it difficult to turn down requests to lead a plethora of groups from different clubs to the junior national team.

Callison joked that his wife reminds him before every meeting he goes to, not to accept any new positions.

However, Callison’s strong passion for molding the youth of the community created a habit of wanting to help more.

Although Callison may seem like a natural born leader, he doesn’t believe all leaders are born, rather guided to success.

“Leaders are not necessarily born but leaders, when asked to do a certain job or they see a job that needs to be done, they do it.”

After three years at the helm for Casteel, the team still does not have a senior class. Despite this, the team is 31-4 in their dual meets and Callison views his team as a competitive force in the 3A division.