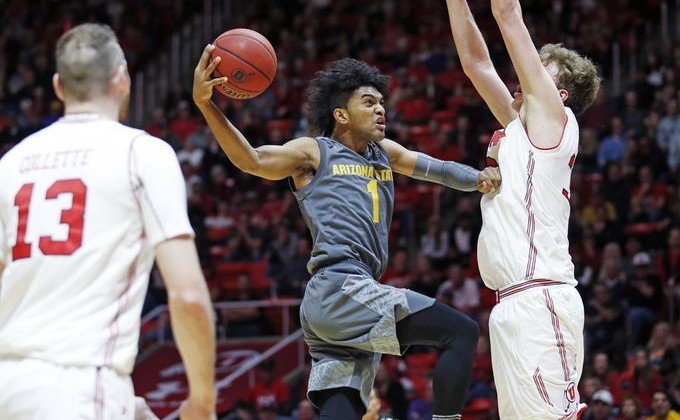 When then-No. 3 Arizona State traveled to McKale Center to face rival Arizona, most viewed it as a measuring stick. A chance to see if these up-tempo, new-look Sun Devils were worth the hype and national prominence they’d received after wins over Xavier, Kansas State, St. John’s and Kansas on the road.

They lost in Tucson. No longer undefeated, but it was a close game and the rivalry looked renewed. The bigger question became: How would ASU look on the Rocky Mountain road trip?

The fourth-ranked Sun Devils split that, losing at Colorado before winning in Utah. They played a little role reversal, too. They seemed affected by the Colorado altitude and they weren’t shooting well to begin with. But at Utah, they grinded out an 80-77 win through some adversity —three men fouled out and there were 18 lead changes in a game that was tied 11 times.

Takeaways from the Rocky Mountain trip:

-Overall, this trip showed us that ASU and Arizona won’t be able to cruise through the Pac-12 slate while college basketball fans await the Feb. 15 rematch between the two rivals in Tempe. Two days after defeating ASU, Colorado took down Arizona. Two court-stormings in a 48-hour span. How’s that for crazy? And Utah? Well, it had a chance to defeat Arizona before losing control of that game. The Utes also came close to upsetting ASU as well. They’re probably kicking themselves knowing they could’ve swept the Arizona schools just like Colorado. The big lesson here: The parity in this year’s Pac-12 is real.

-Shannon Evans seemed lost, but he found his way back. Evans had a stretch of 0-14 from 3-point range before taking the floor at Utah. Against the Utes, he scored 22 points on 5-7 from distance. That’s the type of performance the Sun Devils need from him going forward. On the note of role reversal, senior guard Tra Holder had just 11 points against Utah after scoring 24 at Colorado. Evans had just 11 at Colorado as the Sun Devils once again couldn’t find reliable scoring outside of Holder, just like in the Arizona game.

-The Sun Devils are going to need a more consistent presence inside. Wait, don’t attack me yet. I get it: ASU’s revamped roster gives them that presence. Yes, but that’s if those guys can stay on the floor. At Utah, Romello White had just 3 points and fouled out in only six minutes. Vitaliy Shibel fouled out in seven minutes and didn’t score. De’Quon Lake scored four points and lasted 17 minutes before fouling out. The big men need to find ways to stay on the floor. That said, Lake and Shibel didn’t play much against Colorado. The inconsistency lies with how effective those big guys are in certain matchups. There are times when they play big roles and others when they can’t seem to find a groove. They haven’t found their respective strides yet in conference play, though some of that could be inexperience (White is a freshman, Shibel didn’t play last season due to an injury and Lake is a JUCO transfer). One positive is that ASU is holding up much better on the glass this season compared to last. Hurley’s squad has some size and it’s showing to this point.

-ASU fans may be complaining about the refs. The Sun Devils committed a season-high 31 fouls against Utah after being called for 27 at Colorado. So what’s the difference? In my view, Sunday’s game at Utah was called very ticky-tack by the officials — for both sides. There were calls fans of each team could have complained about. Here’s what I’ve noticed from conference play as a whole, though: Refs aren’t giving ASU the “small guy fouls,” if you will. They aren’t letting Holder, Evans and Justice sell charging calls. There also haven’t been as many fouls called on their drives to the hole. Coach Bobby Hurley has talked about using new rules to his team’s advantage, but it appears ASU didn’t get as much of that benefit the since conference play started. For the most part, it seems to go both ways. Can’t blame the officiating. If ASU shoots better against both Arizona and Colorado, it wins. Simple.

-ASU needs to figure out how to score against a zone defense and quickly, because the Sun Devils won’t stop seeing it until they do. They shot 45 percent at Utah and were 8 of 24 from deep. They shot 36 percent from the floor against Colorado and made 9 of 34 from 3-point range. That won’t get it done against top teams. Part of that is because the Sun Devils haven’t figured out ways to effectively score against zone defense. They’re great at blowing by plays and drawing fouls on dribble-drives against man-to-man defense, but the zone is different. It requires efficient, careful passing and guys to be in position to break down the zone. ASU is more talented than both Utah and Colorado — and many other teams in the conference — primarily because of its three senior guards, but it seems the Sun Devils haven’t solved the 2-3 zone yet. Or maybe the guards just slumped at the wrong time and it’s a coincidence. Doubt it, though. Regardless, this is a team that sank 14 of 28 deep balls at Allen Fieldhouse in a road win over then-No. 2 Kansas. That sniping prowess is there, it just needs to carry over game to game. The Sun Devils have hit a bit of a shooting funk right now, but they should be able to figure it out.

-Let’s piggyback off that last takeaways. Here’s how you can tell what ASU is experiencing is most likely just a shooting slump: Turnovers. ASU committed 13 against Utah, but the Utes had 12 themselves and only scored eight points off of ASU’s miscues. The Sun Devils turned it over just seven times at Colorado and forced 14 turnovers. There have been some bad turnovers against the zone defense, but it shouldn’t be too big of an issue moving forward. A team led by senior guards usually does a solid job of taking care of the ball and ASU is no different.

-Remy Martin is already well-known for his defensive prowess. ASU fans have had him on the radar since the summer. The rest of the country saw what he was all about when he stole the ball more than a few times at Kansas. But he’s as complete a freshman guard as a coach can hope to have. He scored 11 at Utah and is averaging around 10 per game this year. He also had a nice no-look pass against the Utes. He’s also shown he can be primed for the big moment, like when he scored a string of seven points after entering the game off the bench in Tucson and eventually ended with 11. He’s going to be a huge building block for this program.

-Just as they weren’t allowed to ease into their road schedule, the Sun Devils won’t have time to comfortably slip into the Tempe slate. Oregon comes to town on Thursday. The Ducks are 11-5 and 1-2 in conference, but have some good pieces. After battling them and Oregon State, ASU goes to play Stanford and Cal before returning home to play the Rocky Mountain schools. That entire stretch is important. ASU needs to crush that and here’s why: The Sun Devils play the Washington schools on Feb. 1 and Feb. 4. Then they return to Wells Fargo Arena to face the Los Angeles schools before a Feb. 15 showdown with rival Arizona. The first two weeks in February will be tough.

To anybody who sends money to the local online pubs- me and my folks with rivals, the athletic, azcentral, 247, or who supports sports360az, THANK YOU. https://t.co/dPK6L36K9G
View on Twitter
0
4