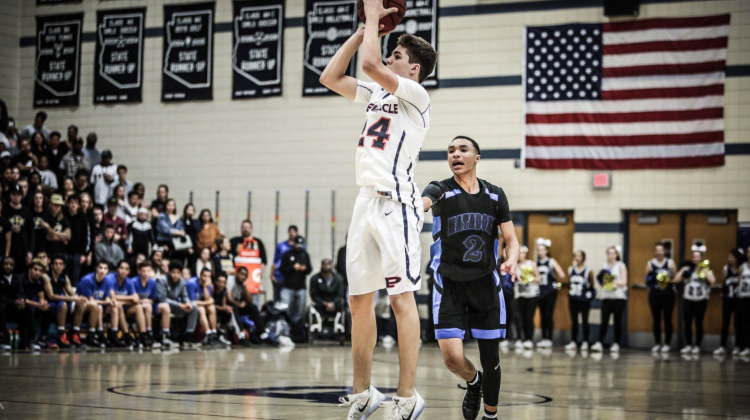 Ranked 2nd in 6A, the Pinnacle High School boys’ basketball team finally has a completely healthy roster and the Pioneers are getting it done on and off the court.

Sophomore guard Nico Mannion broke his left hand in early October, junior Trent Brown was sidelined with a back injury and seniors Alex Fisher and Calvin Schapira were also inactive until last week.

With three key players out on injury, the younger players on the roster took the court and struggled to run the Pioneers’ motion offense. However, head coach Charlie Wilde saw an advantage.

“On the flipside, it was great because all those young guys got experience and now I have tremendous depth in tight games, close games and against tough competition,” Wilde said to Sports360AZ.com. “It will benefit us in the long run. It was a little frustrating at the time but now we see that we’ve really improved throughout our whole team because those guys were injured.”

After weeks of healing and physical therapy, Wilde has every player dressed without any limitations.

Brophy College Prep, the #1 ranked school in the 6A Division, is on the schedule for February 2nd. Despite having the powerhouse Broncos game in the near future, Wilde says they’re focusing on each game day-by-day first and then a state championship.

“Practice until the last possible day we can practice,” he said. “We always talk about trying to get to that last practice possible. That would be one of our goals.”

Wilde has players who have what it takes and more, especially in the classroom. The Pioneers have an average team GPA of 4.01 and not a single player is allowed to step on the court with a C grade or below.

Wilde remembers the time during his starting point guard’s freshman year and first quarter when Mannion’s father called the coach up about his son’s grades.

“I thought oh my goodness I thought he was a good student, so I went up to Nico and I gave him the hard ‘you got to get your education’ talk,” Wilde said. He then asked, “You know, what is your grade so I know?” Mannion replied, “I got an 88.4.”

Grades are always the first priority for the team.

Mannion and his fellow starting guard Brown, will be leading the undefeated region team into Friday night’s game against the Boulder Creek Jaguars at 7 p.m.