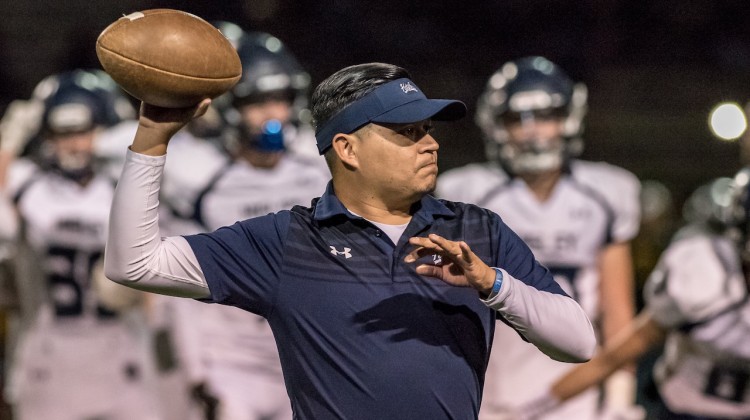 The coaching carousel continues in Arizona and a West Valley contender has named their head coach.

“I’m glad (Cactus is) taking a chance on a first-year coach,” Ortiz said. “At the end of the day, I wouldn’t be where I am at without (Higley head coach Eddy Zubey). I’ve been with him ten years, so that was probably the toughest decision.”

Ortiz and Zubey have spent 10 years together originally at St. Mary’s and at Higley. Ortiz said he will use plenty of lessons he learned while coaching with Zubey now that he is leading his own program.

“(He taught me) just to be a better human, a better man,” Ortiz said. “We teach character over at Higley and that’s what I’ve learned the most. There’s a million ways to do the X’s and O’s but it’s about the character-building and the kids.”

Ortiz was the offensive coordinator and called plays for the Knights for the last six years. Last year, Higley averaged 54 points per game and made it to the 4A state semifinals.

“Just seeing Joe come from the first year we were together, he was a JV position coach and after that first year, I brought him right up to varsity.,” Zubey said. “I could tell from his work ethic, he was always readily-available, he was always around, he wanted to learn, asking questions, whenever I needed him, he was there for me. That has developed over the last ten years, and he’s been my right-hand man for the last six years.”

According to Zubey, Ortiz gets the most out of his players because he connects with them as people.

“He just cares,” Zubey said. “That’s one of the biggest things with coaching kids now is you have to show them that you care… he’s definitely a player-favorite. He will definitely be missed.”

The Knights were known for their versatile playmakers and spreading the ball around to a deep group of skill position players. Ortiz plans to bring that to the Cobras.

The coaching search began when Larry Fetkenhier resigned in late December after coaching the Cobras for 33 years and winning 331 games. Fetkenhier said he was informed the school would be going in a different direction by administrators.

Last Friday at 11:00 the Cactus Administration informed me they want to take the program in a different direction. I have resigned my position as the Head Varsity Football Coach at Cactus High School today, December 27, 2017 – Larry Fetkenhier

There has been a vocal group voicing their support for Coach Fetkenhier. Ortiz understands the coach he is following and that the community may be split on this decision.

“It’s definitely going to be a challenge, I know it’s going to be split but at the end of the day, they made their decision and I thought it was the right time to put in for a head job and it had to be the right place. I know that they have a tight-knit community and they’re close. That’s what we had at Higley and St. Mary’s.”

“I can’t be Larry Fetkenheir, I have to be Joseph Ortiz. I’m not going to change who I am. I’m going to be who I am and that’s putting the kids first. I have big shoes to fill, absolutely. He did great things at that school and I applaud him. He’s a Hall of Fame coach, but at this point, we have to move forward and do what’s best for Cactus football.”