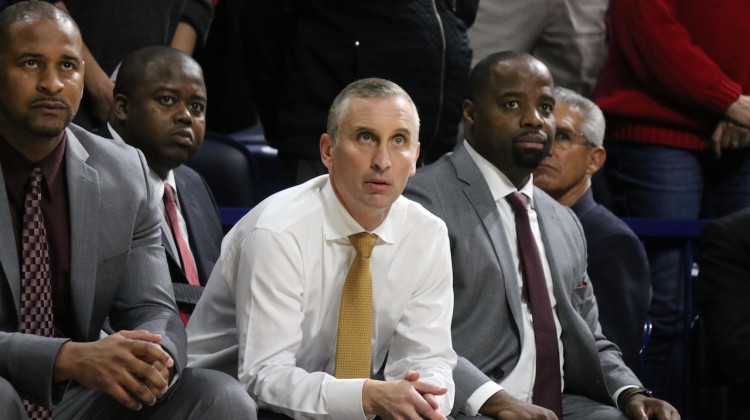 • When will the shooting woes end?

The Sun Devils, a group heavily reliant on the 3-point shot, have struggled from distance since Pac-12 play started. They went 8-for-25 in Tucson, 9-for-34 at Colorado and 8-for-24 against Utah. Two losses and a win.

ASU is learning to play against the zone defense it’s seen from opponents recently, and though it’s getting good looks from beyond the arc, those shots aren’t falling. Before conference play, the Sun Devils’ lowest shooting percentage was 43.9 percent in a win over Vanderbilt. The percentages from the floor in their last three games, in order: 37.9, 35.5, 44.8.

Shannon Evans, the team’s second-leading scorer, didn’t reach double figures in Tucson. He went 0-for-8 from 3-point range against Colorado as his woeful slump continued. Thankfully for ASU, he broke out of it by hitting 5-7 from deep against Utah.

Kodi Justice has also struggled in spots, too. Holder only had 11 points at Utah, but was picked up by Evans just as he has picked Evans and others up throughout the season.

Sometimes shots don’t fall. It’s basketball. But how much of that, if any, will linger?

This is still the same team that hit 13 3-pointers in a win over Xavier and 14 in a victory over Kansas at Allen Fieldhouse. The one that shot 50 percent or better in eight of its first 12 games.

And the one with skilled scorers. Holder set a career-high with 35 points against UC Irvine, then scored 40 in a win over ranked Xavier two games later. When Holder only scored 11 against Kansas State in Las Vegas, Justice dropped 28. Even with his recent funk, Evans still ranks 10th in the Pac-12 in scoring with 16.9 points per game.

• When will the big men find more consistency?

This isn’t a make-or-break sort of thing. The Sun Devils are led by three senior guards who are great scorers, so they can still win without heavy offensive contributions from big men. But, if Romello White, De’Quon Lake and Vitaliy Shibel can find grooves on offense, this team can become much more lethal offensively.

Really. Imagine a world where Holder, Evans and Justice are still scoring, but they’re able to dish to White on the drive. Or kick to Shibel for a 3-pointer, which he’s shown he can make. Or even if Lake remains active on the glass with his putback slams.

White is averaging 12.8 points and though he scored 10 at Colorado, he had 2 against Arizona and 3 at Utah. Lake averages 8.2, but has been inconsistent, and Shibel scores 2.8 per game.

Let’s get it straight: These big guys are young. It’s going to take time for them to hit their respective strides. And even so, they’ve shown to be a valuable presence inside even when they’re not scoring, which seems most important in the big picture. Scoring isn’t their main priority, and they do the rest of their tasks fairly well for where they are in their respective developments.

White (8.2 rebounds/game) leads the team on the glass and Lake (6.0) ranks third.
The revamped roster has given Bobby Hurley’s group a newfound inside presence it didn’t have last season. That’s honestly made a huge difference because the Sun Devils look like they can compete with anyone — they may not win, but they’ll be in the game.

• Can ASU still get to the free throw line while stopping other teams from getting there?

When the Sun Devils started the season 12-0, drawing fouls and sinking free throws provided them a huge boost on the offensive end. That, along with their hot shooting, made them almost impossible for teams to defend. As an opposing coach, do you defend the 3-point line and chase them off? If so, the small, quick guards are going to drive to the hole, and at that point, the test becomes defending without fouling, even more difficult with the NCAA rule instituted a few years back that said a defender putting his hands on a ball-handler is a foul. Refs clamped down on hand-checking and guards benefitted.

ASU attempted more free throws than its opponents in each of its first 13 games, but the Rocky Mountain road trip proved tough with the whistles. Colorado shot 32 free throws in a win over the Sun Devils and Utah took 36 in a loss. Hurley was reprimanded by the Pac-12 for his comments regarding the officiating after the loss to Colorado. At Utah, three Sun Devils fouled out and the team’s 31 personal fouls tied the mark for its most in a regulation game over the past 11 seasons (ASU committed 34 fouls in an overtime loss at Washington in 2016).

So, what changed since the start of conference play, and more specifically, in the last two games?

If you looked at Twitter, you’d see “#Pac12refs” trending during ASU games. It appeared the officials in the Colorado and Utah games missed calls both ways. The referees in Salt Lake City seemingly called ticky-tack fouls the entire game, slowing the pace. Maybe some of it can be chalked up to life on the road being difficult.

Nonetheless, the Sun Devils are best when they’re shooting well and have the added element of drawing countless fouls on drives to the hoop.