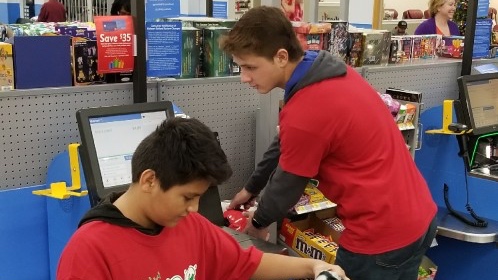 Brock Purdy is this weeks Valle Luna “Making a Difference” athlete of the week. Purdy, a senior at Perry high school, just hosted his third annual  “Shop with a Jock” event. 65 athletes from Perry, Casteel, Queen Creek, Mesquite, and ALA take students from Four Peaks Elementary Christmas shopping at a local Walmart. Each athlete pays for the kid’s toys out of their own pockets. Purdy and his mother put the event together.

Brock iBrock is the VP of Fellowship of Christian Athletes at Perry high school and volunteers at Rockpoint Church. On the football field, Purdy was a man among boys in 2017. He led the Perry Pumas all the way to the 6A State Championship game. He was named the National Football Foundation’s Danny White quarterback of the year and has received several other honors.

He has a 3.9 GPA. Brock Purdy, this weeks Valle Luna “Making a Difference” athlete of the week.