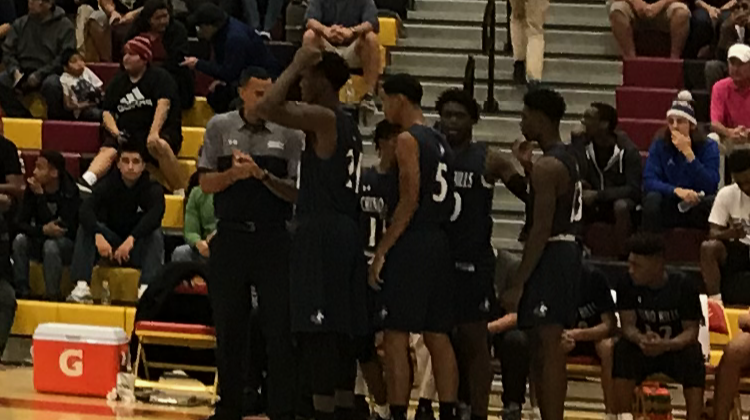 If you needed an idea of what Chino Hills coach Dennis Latimore values, just look at the way he handled the situation with LaVar Ball. He stood up to Ball, whose sons helped bring the school’s basketball team to national prominence.

“I think in any business or in any occupation, each person should respect themselves and respect what they can bring to the table,” Latimore said of the situation with Ball. “And I mean, at the end of the day, nobody is going to tell me how to do my job. That’s the best way I can put it.”

In October, LaVar Ball emphatically announced he was pulling his son, LaMelo, out of Chino Hills because of Latimore, who won a state title as a sophomore in high school at Mesa Mountain View under Gary Ernst, Arizona’s winningest coach. LaVar told reporters at the time that he didn’t appreciate how Latimore wanted to do things his own way.

Chino Hills on Friday night lost to Phoenix Shadow Mountain, 85-81. Chino Hills trailed by as many as 16 points, but clawed its way back. You know who Latimore’s team could’ve used?

Chino Hills is now 3-3 this season. That team had just three losses the past two seasons combined. You know who that squad could use?

So, what does that entire situation say about Latimore?

He played college ball at both Arizona and Notre Dame before hooping in Europe after that. He doesn’t feel basketball completely defines him, though.

He’s much more. Latimore spoke passionately about his English studies in college. He said he’s written poems, raps and read books for as long as he can remember.

“This basketball stuff is just a bonus,” Latimore said after his team’s loss on Friday. “Being in the classroom discussing literature, authors, different stuff like that, that’s the day-to-day stuff that I really enjoy.”

Latimore teaches 11th grade English at Chino Hills. He views himself as an educator, someone who didn’t get into it for sports.

“I got in with Teach For America just to teach and help younger kids, just to give them my experience,” he said. “Especially minority students. I didn’t have a lot of minority teachers when I was coming up, so I want some of these students to see someone that looks like them that’s consistent and there every day being a role model.”

He’s had influential people in his life. One is his mother, who taught Special Education for 25 years before recently retiring. Another is Ernst, his former high school coach.

He said he remembers Ernst’s attention to detail. Practices were always neatly organized and Ernst’s always demanded perfect timing when his team ran his signature flex offense. But Latimore has also brought that attention to detail to the classroom with his lesson plans and the way he teaches.

Did he know Ernst would be a coaching legend when he played for him?

“I felt like he was a very high-character person,” Latimore said of Ernst. “Even back then, I really respected him. At the age of 16, I didn’t know how legendary he was. But I got a sense of his greatness.”

On Friday night, Latimore’s team fell behind big. It looked as if his guys were losing their composure at points. However, they regrouped.

Ask Latimore about his team almost completing a comeback and he’ll credit the players. It goes back to one of his core basketball beliefs.

“With great teams on any level, in my opinion — and I believe it’s a fact — it’s 10 percent coaching and it’s 90 percent these players,” he said.

Yet, he still stood his ground in the situation with LaVar Ball. And afterwards, Pluma said, Latimore talked to the team about that incident often.

“It was a good situation kind of in a way because he was like, ‘We lost a key player but’s going to make us stronger as a team’ and all that stuff like that,” said Pluma, who is good friends with LaMelo Ball.

Asked if he received heat for the decision, Latimore said he wasn’t sure. He isn’t big on social media or reading things from outside his small circle.

He said he cared about the opinions of his players, their parents and the school’s administration. All of those, Latimore said, were positive.

During his team’s shootaround before Friday’s game, Latimore met someone who also went to Mesa Mountain View. The two talked about Ernst and how “he’s still getting the most out of players there.”

But in Latimore’s case, Ernst helped him develop into the best person he could be by teaching him how to play like a champion on and off the court.

“The way you carry yourself as a person in the classroom, off the court, those are a couple things I took away from the Mesa Mountain View experience,” Latimore said.