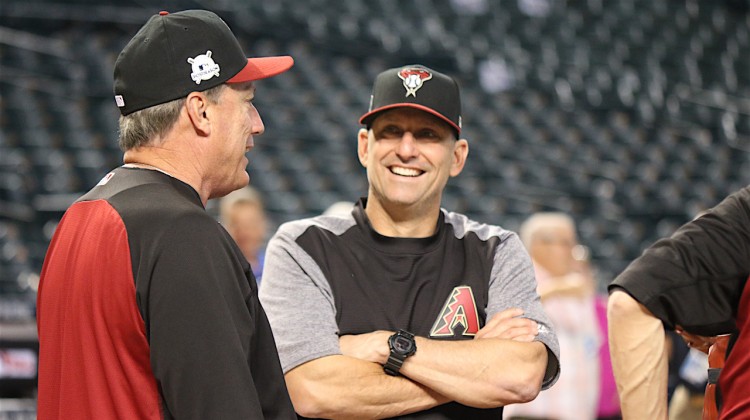 It’s been two months and four days since the Arizona Diamondbacks’ 2017 season came to a close after an NLDS loss to the L.A. Dodgers. Manager Torey Lovullo spoke to the media at MLB Winter Meetings in Orlando, Florida on Wednesday, about questions surrounding the D-backs this offseason and the outlook he has heading into 2018.

The biggest question mark with the Diamondbacks at MLB Winter Meetings has been if they will resign free agent J.D. Martinez. Martinez has a steep price of $200 million, which could be a challenge for the Diamondbacks’ already tight budget. MLB insider Pedro Gomez told Sports360AZ on Tuesday that he believes the chances of Martinez returning to the Valley are low.

On Wednesday, Lovullo noted that the for the first half of the ’17 season the D-backs were playing good baseball without Martinez, but that Martinez did give that push to “take it to the next level,” Lovullo said.

“He (Martinez) was a tremendous addition to our lineup,” Lovullo said. “We’re always optimistic that we’re going to continue to bring in really good players and if one of them is J.D., it would be another wonderful year for us. If not, my expectations are that there’s a natural progression that players walk through, that they’re going to all get better and get more experience and have their own expectations raised to the level where they’re going to fill in those gaps.”

D-backs are still trying to keep JD Martinez, but their people suggest they wouldn’t expect to win if it became a bidding war (tho they have won a past such war, for greinke).

One of the most impressive things about the D-backs in 2017 was their ability to adjust to changes due to injuries and other shakeups.  The Diamondbacks have depth, especially in the middle infield where Lovullo said five different players will be the early candidates for starting roles.

“The way I’m viewing it is it’s Spring Training, it’s going to be very competitive,” Lovullo said. “For the guys that are there and competing for a potential starting spot or a spot on the roster, I hope that they prepare themselves and get ready for a very, very spirited Spring Training because we are open-minded and we know that there’s some very talented group of guys.”

Ketel Marte, Nick Ahmed, Brandon Drury, Daniel Descalso and Chris Owings are expected to be in the mix come March, although there are rumors of talks with the Yankees on trading Drury.

Owings, who was out for the last half of the year with a fractured right middle finger, is a guy that Lovullo said he expects to have a utility role in 2018. Lovullo said Owings’ role could include him playing all three positions in the outfield and both middle infield positions.

“I know that versatility plays a big role in inside of CO’s game and I love that versatility,” Lovullo said. “We’re going to continue to explore that option as using him as that type of versatile athlete. I like to have a lot of mainstays, I like to have some structure where guys know where they’re going every single day right to the same position, but I also think versatility play as important role with certain players and the success of the team.”

The Diamondbacks acquired right-handed reliever Brad Boxberger from the Tampa Bay Rays at the end of November. Boxberger along with Archie Bradley are most likely to be the setup guys for the D-backs.

“We’re just going to try to build back-end pieces,” Lovullo said. “Brad Boxberger is a guy that I’ve seen firsthand. He saved 40 games in a very rugged AL East and has great stuff, and he’s healthy. We feel like with those two components on the back end of our bullpen and we’re going to continue to build pieces we have pieces that are still there, we like the way that’s shaping up.”

In the starting rotation, Lovullo said he expects Anthony Banda to make a strong push for a spot in rotation come Spring Training. As of Wednesday afternoon, there were rumors of multiple teams’ interest in Zack Greinke as well as a trade for Patrick Corbin with Drury to the Yankees, which would mean the rotation could get a revamp if any of that speculation comes to fruition.

The book has been closed on 2017, but plenty is heating up this week in Orlando with speculation on free agents and trades.

Keep it here on Sports360AZ.com for more news on the Diamondbacks offseason.