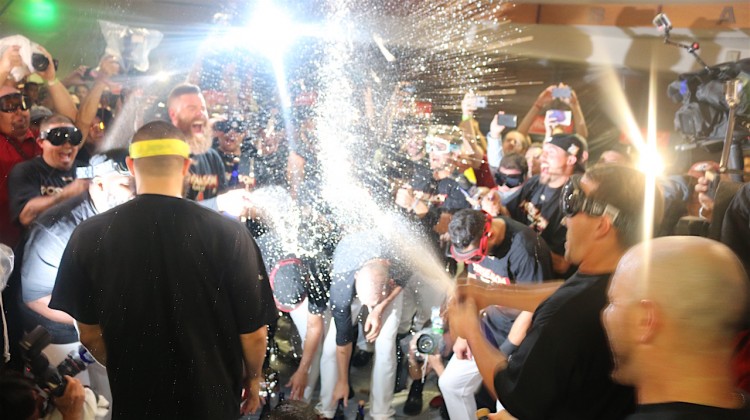 You with me? Lists feel like chores. Sports isn’t made for lists. It’s a blank canvas waiting to be filled in with different shapes, sizes and colors. There is no “one size fits all” when it comes to putting together a list for the 2017 Arizona sports scene. I’d rather just type and look up after an hour or so, and see what came out on the other side.

The Cardinals weren’t the worst sports story of the year. In fact, you could make the argument that they weren’t even the biggest disappointment. A win Sunday at Seattle and the hometown heroes of the gridiron will have a 8-8 record. Stunning when you look at the amount of key players who weren’t on the field most of the season.

David Johnson, Markus Golden, Carson Palmer, Mike Iupati, Jared Veldheer and Adrian Peterson are all sitting on the shelf, and yet the football team might win eight games. The special teams weren’t special, and yet the team might win eight games. Those who want to tag 2017 as a bad season would be right in one respect: not making the playoffs for the second year in a row is unacceptable. Taking the emotion out of it for a moment I’d say “injury filled, and disappointment” would be the right words. I was getting text messages from assistant coaches in the league back in early November that Bruce Arians was going to pull the rip cord at the end of the year.

The Diamondbacks were the best sports story in our great state in 2017. A fun, embraceable group of ballplayers that went about their business in a way that was refreshing. There was not an air of arrogance out of new GM Mike Hazen. If anything, he was a blue dot on a blue wall. He just went about his business. I am interested to see how the franchise navigates the waters when it comes to trading Zack Greinke and getting Paul Goldschmidt to sign a new deal to keep him in Arizona.

On the college front,

The University of Arizona basketball program was the biggest disappointment. In March they were eliminated early AGAIN from the NCAA tournament and in September they were thrown into the middle of a FBI scandal that led to the termination of Sean Miller’s longtime assistant coach, Book Richardson.

While the Arizona basketball team took its lumps, Wildcat football became a bit of a “thing” in 2018. Khalil Tate became a national name. Rich Rod took his team to a bowl game after bottoming out a year earlier. I’d like to see the success continue in 2018.

I’ve said for the last two years that the Arizona State basketball team is in better shape than the football program. While most ASU followers let me know that they didn’t agree, I’d say that the same feeling applies as we end 2017. Basketball is ranked #3 in the nation, and football is in uncharted territory with Herm Edwards now the head coach. The program needed the reset button pushed.

Phoenix Rising FC continues to grow its brand. MLS is going to happen. The stadium at the 101/202 freeways will be a game changer to the sports landscape. It’d be surprised if we didn’t see double digit growth in attendance in 2018. The future is bright on the pitch!

The Coyotes are still here. They have some nice young pieces, but they aren’t the factor in the sports marketplace that they need to be. Steve Patterson hasn’t been on the job long enough to make the impact that I expect him to make with this organization.

On the high school platform, we are seeing more and more players from all sports make a national impact. It’s no longer a surprise to see a Arizona high school football player go to Michigan State, Oklahoma or Texas A&M and make an impact. For that matter, in any sport.

Lastly, I saved the Suns.

They deserve to be last because that is their annual landing spot. The owner is making gobs of money for his investors, but the product on the floor isn’t much better than five years ago. Remember, May of 2010 was the last time the Suns hosted a playoff game. I’ve spoken and written plenty about the rudderless ship that is the Suns. What was once the best and proudest brand in Arizona has now become almost an afterthought. The nights that I’ve been out to dinner at places that show sporting events, and have forgotten that the Suns are playing, are too long to list.

If we were to do a March Madness bracket of franchises in all of Arizona Sports that have figured out how to win, the Waste Management Open, the Fiesta Bowl, Arizona Cardinals and Arizona Diamondbacks would be the top seeds. The Suns would be a #16 seed. C’mon Robert, we don’t care where the decimal point falls. Winning is the most important metric to most sports fans…