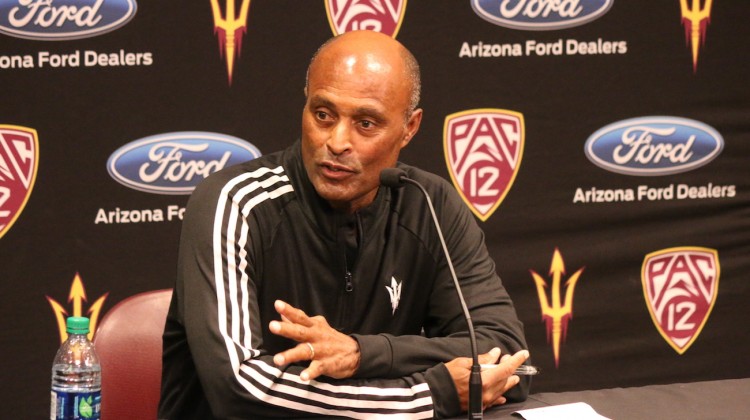 When Arizona State Vice President for University Athletics Ray Anderson spoke to media after firing Todd Graham on Sunday, he was asked about the proposition of hiring his guy. After all, he wasn’t the one who hired Graham and many people thought he’d want his own crack at bringing his own football coach into the program.

“It’s not necessarily about bringing my own guy in,” Anderson said. “I want the right guy, for the right reasons. That’s what I’m looking at right now.”

If Herm Edwards is actually set to become Arizona State football’s next head coach, as SuDevilSource.com first reported, Anderson sort of contradicts himself, even if he believes Edwards is the best candidate. Anderson represented many coaches during his days as an agent, including Edwards.

So, in essence, isn’t Edwards his guy? Seems like it.

Edwards coached in the NFL for eight seasons, going 54-74. He last coached for the Kansas City Chiefs in 2008. He hasn’t coached in college since 1989.

This hire seems strange for a few reasons. First off, the college game is much different now than almost three decades ago when Edwards last coached in the sport. Recruiting is key. Also, he hasn’t coached at all in about a decade. Anderson fired Graham and though people knew he had NFL connections, it looked as if he’d hire former Texas A&M coach Kevin Sumlin.

Nope. Instead, Anderson went deep into the pro ranks to someone who now analyzes the sport for ESPN.

That said, let’s not write off Edwards before he starts. Anderson wanted a dynamic recruiter. Give Edwards a chance.

It seems those who know him think he’s genuine and a good motivator. That helps. Also, DevilsDigest.com reported that Edwards will keep the current coaching staff in place. That is something that will immediately help recruiting, especially because of the new December signing period this year.

It also should make the coaching transition a bit easier because Edwards will be stepping into a situation with coaches who have been there, albeit not for a long time. That said, why Anderson didn’t just promote offensive coordinator Billy Napier remains a question.

Napier is young and he’s never been a head coach, but there are so many programs trying to find the next diamond in the rough. Napier has worked for both Clemson and Alabama. He won two National Championships with the Crimson Tide. He also went to multiple prestigious bowl games there.

There were times when his playcalling was a bit baffling in his first year with the Sun Devils, but he showed coaching ability. Just take a look at quarterback Manny Wilkins. He improved and Napier deserves some of that credit.

To top it off, it seems the players love how Napier relates to people. Napier’s late father was also a head coach. Anderson seemingly had perhaps the next young breakout coach under his nose, but went a different avenue.

But as I said before, don’t shoot down Edwards before he even arrives in Tempe. He should be able to win some fans over with his personality alone at his introductory press conference.