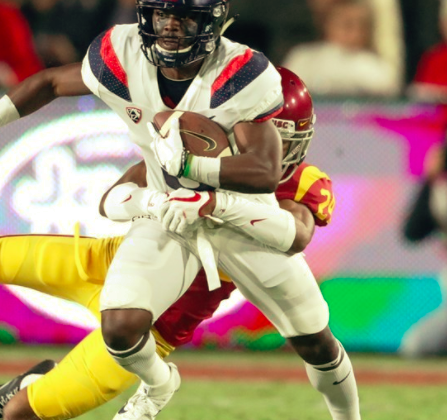 Khalil Tate used the national spotlight Saturday night to show that he belongs in the same room as other Heisman candidates. While his team lost to USC 49-35, Tate threw for two scores and ran for 161 yards and a touchdown. The sophomore led his team back from a 22-point hole, with four touchdowns in a span of 11 minuets.
USC would pull away for the victory behind the legs of running back Ronald Jones II, who rushed for 194 yards and three scores.
The Arizona defense could not stop USC. The Trojans rolled up 642 yards on the night. Arizona has allowed over 600 yards in offense in each of the last two games.
The Wildcats are now tied with Arizona State for second place in the Pac-12 South division.
Arizona finishes out their home portion of the 2017 schedule Saturday night against the Oregon State Beavers.