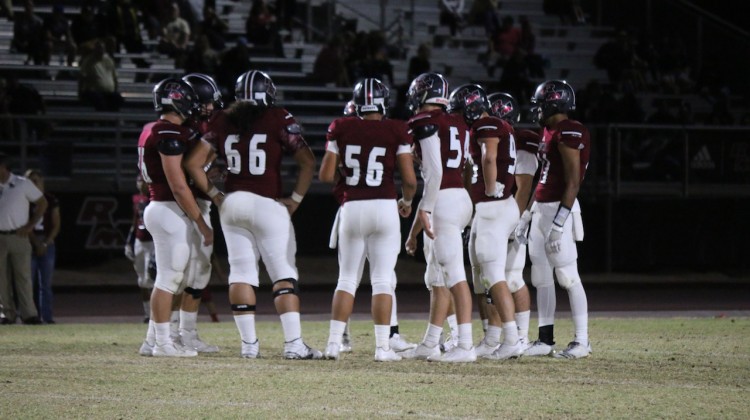 The red-hot Red Mountain Mountain Lions are riding a 10-game winning streak into their matchup Friday night against the Chandler Wolves.

As the No. 7 seed, the Mountain Lions are the Cinderella-story of the 6A playoffs and will take on the Chandler Wolves who are the No. 3 seed, but are arguably the best team in 6A.

According to MaxPreps, Red Mountain is ranked as the No. 12 6A team in Arizona and despite being the No. 3 seed, the Chandler Wolves are ranked No. 1 in the state in those rankings.

Red Mountain may be the underdog on Friday, but Coach Peterson plans on his team playing on Dec. 2.

“We expected to make it this far in the playoffs and expect to continue,” Peterson said. “We always have a goal to win the Gold Football (State Championship). However, that is not the end all, be all, because there is only one team that meets that goal every year and it sure does not make the rest of us unsuccessful.”

The team captains for the Mountain Lions are senior guard/nose guard Julian Chism and senior quarterback Cannon Griner, but Red Mountain’s spark plug is senior Lance Lawson. Lawson can play any skill position, has scored in every possible way on offense.

Lawson has thrown for 350 yards, six touchdowns and one interception. He has 530 yards on the ground and seven rushing touchdowns, and has 223 receiving yards along with two touchdowns.

“We have a hard time scoring without Lance on the field… Period. That is what an impact he makes. He can throw for TDs, run for TDs, catch TDs, make people miss and turn sacks into 65 yard gains, he can do it all. He is as dangerous an offensive weapon as I have ever coached.”

One of the defensive leaders for the Mountain Lions is junior Mike linebacker Delton Jackson. Delton tore his MCL, ACL and meniscus on a non-contact play on the last defensive play in practice on the Wednesday before Red Mountain’s game against the Mesa Jackrabbits. Delton is second on the team in tackles despite only playing in seven games this season.

“Delton Jackson remains a leader on this team,” Peterson said. “As a very experienced defensive player and senior he continues to attend every practice, event, workout, and encourage, coach and help all those around him. He continues to hold his teammates accountable to a high standard and will not allow them to be satisfied with anything but their very best and has been and continues to be the heart and soul of this team.”

Peterson and his staff not only want to prepare his team on the field, but also for their life off the field. He wants to instill good character in his players and prepare them for life after football.

“We want to try and turn these players into good young men who will be good community members, husbands, fathers, etc. Raise and be a positive part of school culture and spirit. Make a positive impact in the community. Never give up when games, times, life, marriage, etc. is hard or difficult. Compete at all times in everything we do.”

Kickoff for No. 7 Red Mountain vs. No. 3 Chandler is set for 7pm Friday night.