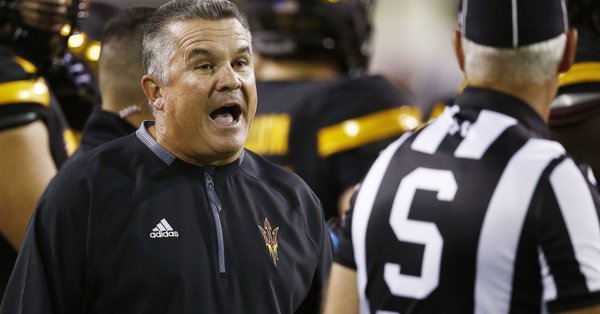 That’s nothing against the Sun Devils at all. They deserved to beat Washington and Utah. Neither of those games were flukes because they were won with elite defense and an offense that made key plays in crucial spots.

But wow, does that USC loss make you wonder. ASU had an opportunity to be in the driver’s seat in the Pac-12 South, but fell flat in a 48-17 loss to the Trojans.

That loss came after flashing potential in two big wins.

After a defensive turnaround.

After finding a running game.

After everything they’d improved the past two games, how did the Sun Devils come out and do that?

“When I went back and looked at the film, my perceptions that night were, ‘Golly, we really didn’t play very good,’” coach Todd Graham told reporters during his weekly news conference on Monday.

The Trojans climbed from No. 21 to No. 17 in the AP poll after defeating the Sun Devils. Their ranking seems modest, but don’t let it fool you. This USC team had College Football Playoff aspirations. The first edition of the CFP rankings will be released on Tuesday and USC expected to be in the top-10, if not the top-4. It expected to have a chance.

USC lost at Washington State a month ago, and then was blown out by Notre Dame a week before beating ASU. Following Saturday’s game, Graham discussed his team’s mishaps, but also credited the Trojans.

USC needed that win and sure played like it.

“Going back and looking at the film, we got their very best game,” Graham said Monday. “They played extremely well. They played absolutely the best that I’ve seen them play…”

That’s a silver lining if you’re an ASU fan. The wins over Washington and Utah got everyone pondering whether this team could win out.

If they did so, they’d be Pac-12 champs. Those hopes took a hit on Saturday, but they’re not out of the question.

And look past that. Sitting at 2-3 in the bye week, who would have expected ASU to be .500 at this point? I sure didn’t.

Before the season, many people looked at the schedule and the gauntlet October stretch popped out. Washington, Utah, USC. Well, the Sun Devils went 2-1 and showed sizeable improvements in each facet of the game.

The closest thing to a “fluke” in those games was a kicker missing two chip-shot field goals in the win over Washington. But what underdog doesn’t get a break or two in an upset win? The Sun Devils then dominated Utah from start to finish in their most complete performance of the season.

Looking ahead, November seems winnable. I believe the Sun Devils can go 4-0 by beating Colorado at home, UCLA and Oregon State on the road and Arizona at home. It’s possible, especially when considering what the Sun Devils showed for two weeks.

Will they? Maybe, maybe not. But they sure can. Doing so would make them 8-4, better than anyone could’ve expected after a rough September.

Most pundits had ASU around 6-6 this season. Those who predicted eight wins, however, were often looked at funny. Now it’s a real possibility.

ASU didn’t look good against USC, a team firing on all cylinders last Saturday. The Sun Devils were in control of their own destiny, but after that, they’re not. At least for now, anyway.

With a new secondary, a young offensive line and so much staff turnover, rough times were expected. We’ve seen those.

The Sun Devils have also shown potential, talent and fight. They could’ve easily quit on themselves during the bye week. But they didn’t.

That should be enough for optimism, even if a loss to USC leaves you wondering what could’ve been.