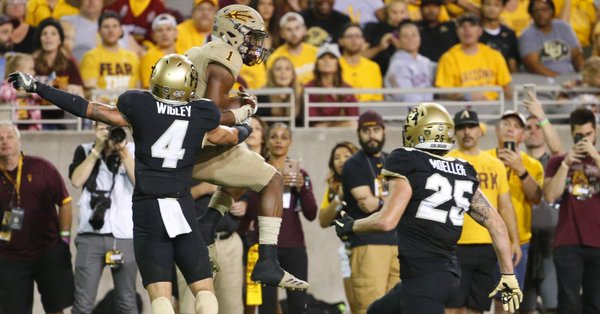 So, about that Territorial Cup cellar-dweller showdown. The one where both teams are fighting to avoid last place in the Pac-12 South?

That doesn’t look likely at all. Just like we all predicted.

Arizona State and Arizona were picked by many pundits to be at the bottom of the division, but in November, Arizona is in second place and ASU is in third.

Here’s the funny thing: If you’re an ASU fan, you were probably rooting for the Wildcats against first-place USC last weekend. Had they won, the Territorial Cup could’ve very well been for the Pac-12 South.

That didn’t happen, but nonetheless, the end-of-season rivalry seems like it’ll be more highly regarded than many people expected at the beginning of the year. That should count for something.

But before we get there, the Sun Devils need to take care of business. They play UCLA this weekend and Oregon State after that, both on the road.

Though those two foes are a pair of the conference’s worst teams, beating them won’t be easy for ASU.

ASU mounted a comeback to defeat Colorado, but the Sun Devils didn’t look good in the first half. Colorado dropped three sure touchdowns in that half, and had multiple chances to put the game away in the second half.

The Buffaloes didn’t, so credit ASU, but the Sun Devils have returned to ground level after wins against Washington and Utah. ASU is a talented team, but inconsistency has held it back.

At times, it doesn’t appear ASU does much well. Other times, it shows another side, like in the second half of the Colorado game when the rushing game showed up in a big way.

When ASU defeated Utah near the end of October, it marked the program’s first conference road win since 2015. Its last before that? A victory at UCLA.

I probably don’t even need to mention what happened the last time ASU played Oregon State. Now, the Beavers are riding low right now at 1-8 and 0-6 in the Pac-12. But just last season, ASU lost to rival Arizona, a team that entered the Territorial Cup winless in conference.

The point: These next two weeks aren’t “gimmes” at all.

Now let’s look at the bigger picture for a second. USC finishes the season at Colorado and at home against UCLA. The Trojans should win both of those games, and if they do, ASU won’t reach its goal of playing in the Pac-12 Championship Game.

It’ll take a USC collapse for the Territorial Cup to be for the Pac-12 South, but regardless, the matchup looks much more appealing now than three months ago.