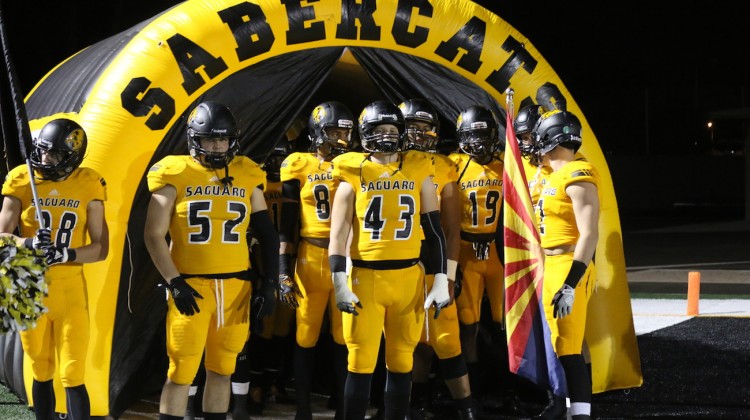 Let’s start from the top and move down. I won’t hit on all these match-ups because I haven’t seen all these teams play, especially at a lower classifications, but I’ve got some thoughts on the 2A-4A games, so here we go.

Let’s kick things off at the top and go from there.

Sunrise Mountain junior quarterback Keegan Freid isn’t only one of the most unique students-athletes I’ve ever featured, he’s also one of the top quarterbacks, in terms of pure production, in the entire state in 2017. Seldom-used as a sophomore (just 23 pass attempts) playing behind Chase Cord, Freid has tallied 46 total touchdowns and nearly 3,500 total yards for the top-seeded Mustangs.

On the other side of the field waits Salpointe’s steady senior linebacker Chris Aguirre, whose 126 total tackles is 50 more than any teammate. Containing Freid, who has been unreal when plays break down, will be extremely important for Dennis Bene’s defense.

Flip it around, Lancers’ star running back Bijan Robinson is flat-out dynamic. The sophomore is averaging 11.3 yards per carry to go along with his 1,556 yards and 24 rushing touchdowns. Salpointe is big up front and will look to grind it out against the smaller Sunrise Mountain defensive line.

It’s always a “measuring stick” game when Tucson schools take on Valley schools so expect this one to be a lot of fun at Ironwood High School.

Saguaro making a deep playoff run is like a sunny day in Phoenix.

Quite routine and nearly always expected.

#SagU’s ‘Drive For Five’ seems to be following the script you’d expect: playing their best at just the right time.

The Sabercats’ defense hasn’t allowed more than 13 points since their 24-21 win over Sunrise Mountain back in late September. To be honest, Jason Mohns’ team hasn’t even been challenged.

The Knights only loss was a 42-14 setback to Saguaro earlier this year. Draycen Hall is not only Higley’s leading rusher (1681 yards, 30 touchdowns) but top receiver, as well (436 yards, three scores). Linebacker Cade Matthews has 32 tackles-for-loss. Yes, 32.

It will be curious to see if Higley is up for the challenge Friday. It’s pretty evident Saguaro has a way of beating teams before they even take the field.

These are two of the hottest teams at any level entering the weekend. Tucson’s Pusch Ridge is unbeaten and Dave Jeffries’ squad out in Queen Creek hasn’t lost a game since their season-opening setback to neighboring American Leadership Academy.

So proud of the run these boys are making! Next stop: Saturday in Tucson at the Semi-final vs. Pusch Ridge! 🏈🔥🏈🔥🏆 pic.twitter.com/TuCR44DlDU

If you like teams who run the ball, this is the game for you. Both teams average over 300 yards per game on the ground. The Chargers two-headed monster of sophomore Zach Jeffries (Dave’s son) and junior Chandler Miles have combined for over 3,000 yards and 42 rushing touchdowns.

On the flip side, the Lions defense hasn’t allowed double-digit points since late September and are an extremely active group with 53 pass deflections and 24 forced turnovers.

It’s pretty evident the defense who puts the opposing offense behind the chains will have the upper hand Friday.

Expect a much closer game this weekend as unbeaten Phoenix Christian has smothered their opponents all season winning every game by at least 21 points. Eagles senior quarterback Hunter Cole has been brilliant throwing 29 touchdowns with just one interception.

That’s right… #Back2Back 💪
Come get a T-shirt while they last! For sale in the front office.#PCGoGreen pic.twitter.com/8zY1zDJ57r

Thatcher’s best defense at Fountain Hills High School could be their offense. The Eagles have rushed for more than 3,000 yards and 42 touchdowns and have scored 50 or more points eight times this season.