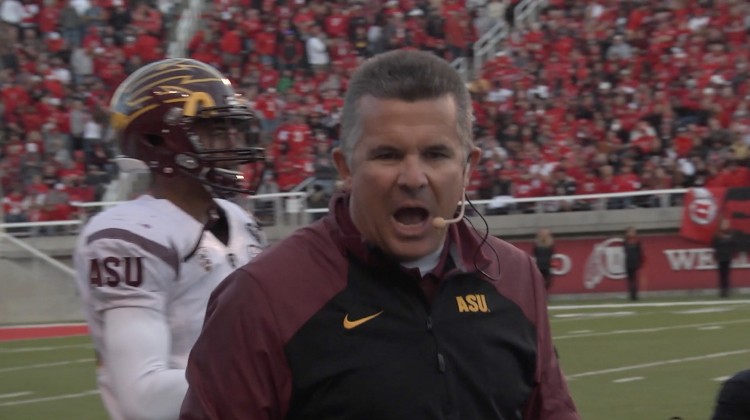 After Arizona State upset Washington, one question loomed: How will the Sun Devils look at Utah?

They sure answered that question, dominating the Utes from start to finish in a 30-10 win. It’s time to put a bow on the victory before the focus turns to USC at Sun Devil Stadium next weekend.

Manny Wilkins wasn’t great, but he didn’t detract from his team’s performance. He completed 19 of 29 passes for 149 yards, and though he had a pick, his defense picked him up. It was far from his best game of the season, but he made throws and plays with his feet when the Sun Devils needed.

ASU had 205 rushing yards. Senior backs Demario Richard (93 yards) and Kalen Ballage (77) paced the team in this category. On one drive, the two broke out consecutive big runs. Richard looked like the power back fans know and love, and Ballage added a nice performance. Coach Todd Graham always says to beat Utah, you have to “out-physical” the Utes (more on this later). ASU’s running backs added to that.

Just like the quarterback, this group didn’t have an enormous influence on the game, but it didn’t need to. N’Keal Harry had 72 receiving yards and Kyle Williams added 38. There weren’t many explosive plays, but Harry and Williams helped ASU convert on key third downs when it needed. No tight end caught a pass, but Tommy Hudson and Ceejhay French-Love aided the running game.

This group wasn’t perfect, but its strides are why it receives such a high grade. First off, it helped provide push in the running game, which is difficult against a physical Utah front. But let’s compare the performance to last year’s game. In 2016 at Sun Devil Stadium, Utah had 11 sacks and 22 tackles for loss. On Saturday, it had one sack and just four tackles for loss. ASU’s offensive line seems to be improving weekly, which has helped kickstart the running game. That, in turn, has helped pace the offense.

Defense: A+
If you notice, I’m not breaking this one up into individual position groups. Why?

Well, after the Stanford loss, I did the same thing. However, the defense received a much worse grade. The overall product was bad.

ASU’s defense, however, seems like it’s turned the page on the first half of the season. The Sun Devils intercepted Utah’s Tyler Huntley four times. It held the Utes to 265 yards, which is impressive considering 81 of those came on a garbage-time touchdown drive near the end of the game.

Let’s break this down a bit more, though. The numbers are astonishing. Look past those, if only for now.

This defense allowed Stanford’s Bryce Love to set a school record for rushing yards in a single game just three weeks ago. In its past two games, it has given up just 17 points.

Koron Crump, its best pass rusher, was injured in the Texas Tech game. He’s out for the season. After that, Jay Jay Wilson moved to Devilbacker to help fill the void.

Understandably, fans groaned. Against Utah, Wilson had a pick-six. Senior Spur linebacker J’Marcus Rhodes tallied his first career interception. Chase Lucas, who picked off another pass, has looked like a lockdown corner against two very good receivers the past two weeks.

If you need a reminder, none of ASU’s four starters in the secondary had ever started a game before this season. Aside from safety Chad Adams, none had even played at the Division I level.

If this defense can continue performing like it has the last two weeks, the sky is the limit for this team.

ASU’s win over Utah means that the Sun Devils and USC will meet next weekend to determine who takes sole possession of the Pac-12 South. Three weeks ago, putting the Sun Devils in that conversation would’ve been unthinkable.

The scary part: ASU shouldn’t be heavy underdogs. USC is coming off a blowout loss at Notre Dame and has looked vulnerable at points this season. ASU has expectations to deal with.

After losing to Texas Tech, Graham, his staff and their players preached conference play being a “new season.” It perhaps seemed silly then, but they’ve sure taken advantage of that mindset.

This team isn’t the same one we watched in non-conference play. It isn’t close to the group that didn’t look like it did anything well.

But after continually “plugging away,” as linebacker Christian Sam put it, the Sun Devils have new life.