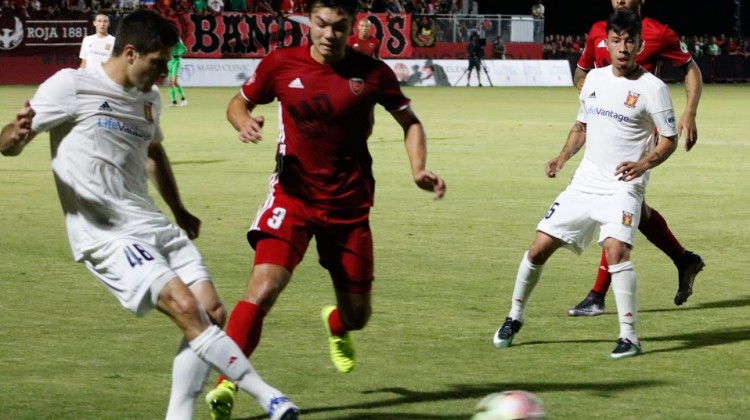 Phoenix Rising FC finished their finest season in style, routing the Portland Timbers FC II 4-1. Phoenix finishing the regular season fifth in the United Soccer League Western Conference Standings with a 17-8-7 record while accumulating 58 points. Up next, the playoffs!
Kevon Lambert opened the scoring after only four minutes he drilled a low line-drive shot from distance past the Portland keeper Wade Hamilton.
Nine minutes later Didier Drogba hit Chris Cortez with a pin point diagonal cross that Cortez volleyed in the net for the early 2-0 phoenix lead.
“The big thing for us is to keep doing the same things that got us here(playoffs),” Phoenix Forward Chris Cortez said(commented) on their late season success and mindset heading into the playoffs.
In the 56th minute Drogba made magic happen inside the box area as he beat three Portland defenders in before making off balance shot that would bounce slowly into the corner of the net.
Five minutes later Portland would score on a low cross that would be tapped in by Portland’s Augustine Williams making it 3-1.
Matt Watson came in relief of Sam Hamilton 61 minutes into the match and 14 miuntes later Watson would connect with Amadou Dia on a give and go at the top of the box area as Watson found a crease between two Portland Defenders to bury the 4th goal of the night for Phoenix.
“With the confidence and chemistry we have built during the season, Phoenix Midfielder Matt Wattson said. “You can see the impact of it now.”
Phoenix Rising officially eclipsed the 100,000 fans in assistance at the Phoenix Rising Soccer Complex for this 2017 season.
According to USL records, Phoenix also passed the half century mark in goals in a season for the first time in club history. Phoenix finishes the 2017 regular season with 53 goals.
After ending in a tie on points standings with Swope Park Rangers in the USL Western Conference standings, Phoenix must now face the same Rangers on October 21, for a road Playoff game at Children’s Mercy Victory Field in Kansas City.
“We did make some mistakes tonight that we are not used to so we need to stay concentrated,” Phoenix Rising Head Coach Patrice Carteron said. “We did some good things but we have also things to do better next week if we want to create something fantastic(result) against Swope Park.”
Phoenix Rising have a 1-1-0 season record against Swope Park Rangers after beating them at home 4-3 and drawing the road matchup 2-2.