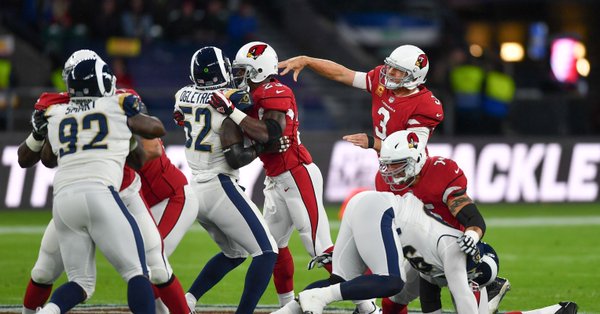 Was Sunday the last time that we will see Carson Palmer in a Arizona uniform?
One week after a shot of adrenalin from Adrian Peterson, the Cardinals slipped back into the dark hole of uncertainty after being shut out for the first time since December of 2012(58-0 at Seattle). Final score, LA Rams win with ease 33-0.

Palmer left Sundays game against the Rams with a left arm injury and never returned. After the game, head coach Bruce Arians said that Palmer suffered a broken arm and would have surgery. http://

BA says Carson Palmer will have surgery on his broken arm and likely miss 8 weeks.


Drew Stanton replaced Palmer in the second quarter and was ineffective. Blaine Gabbert was not active for Sundays game.
Peterson was bottled up by the Rams defense all afternoon. He touched the ball just 11 times and finished with 21 yards.
The divisional loss drops the cardinals to 3-4, with a bye coming next week.