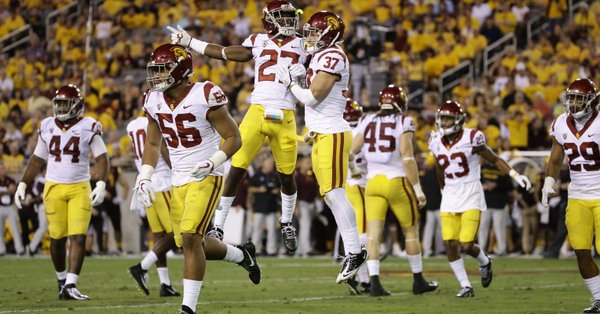 Let’s start with the 10 penalties. Nah, let’s start with the anemic offense. On second thought, let’s start with the calling card from the last couple of weeks, the defense.
Soooooo, when we last left off from the Sun Devils “turned the corner, give us credit” narrative, they were throwing Utah around like rag dolls. Saturday night, USC did the same to the Arizona State D during the 48-17 blowout loss.
I just finished re-watching the game to make sure my eyes weren’t deceiving me. They weren’t.
USC carved up ASU.

607 yards of total offense, 7-16 3rd down conversions by the Trojans, and ASU allowed 29 first downs.
So anyone who wants to lay this embarrassment at the feet of Manny Wilkins and the ASU offense should just take a step back from the ledge.
I am not excusing the poor play on that side of the ball, but I would give the talent of the USC defense quite a bit of credit as to why ASU was M.I.A. Kalen Ballage wasn’t going to tackle anyone if he was playing.

This isn’t the end of the world, though based on my in-box this morning, many of you think it is. Clearly this lethargic of a performance should cause anyone and everyone who was on the “all is well” bandwagon, to take some time to fully evaluate this situation, rather than try and tell me that they’ve got it all figured out.

I watched back the Arizona win over Washington State this morning and I keep expecting the Wildcats to lay a dud like the Sun Devils did last night. They haven’t. A team that plays consistent football is to be admired. That’s happened SO FAR this season in Tucson. It hasn’t been the case in Tempe.

A 31 point beat-down on Homecoming weekend isn’t exactly the way to go about convincing the big cigar (or even little cigar) donors that the program is in great shape.

I’ve seen quite a bit of progress here in 2017 though beating teams in late September and October isn’t any reason for me to proclaim all is well, I’m not going to bury them this morning even after last nights JV performance. Obviously Saturday night was the worst showing of the year, one that should give President Crow and Ray Anderson more of a case to CONSIDER making a change once the season is over.