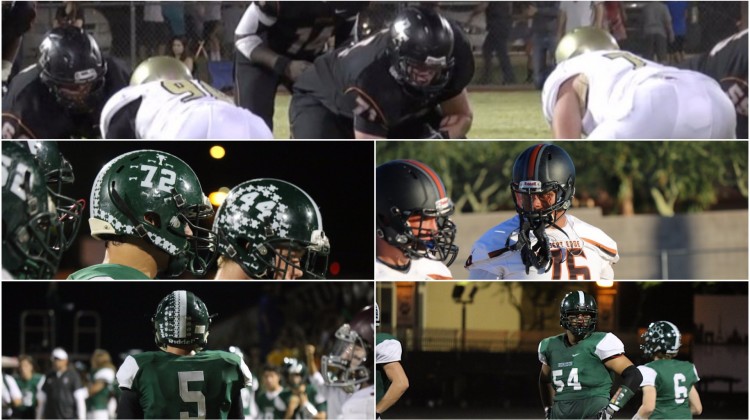 By Jordan Hamm and Jason Jewell

The Aggies currently have eight players on their current roster from Arizona and one who played at Eastern Arizona College.

They literally added an Arizona offensive line in the past 48 hours.

“I think it’s a blessing I get to bring a piece of home with me to a new environment,” Wilhite told Sports360AZ. “Austin is one of my close friends and it is a privilege to experince my college life with him. Also, getting to play with other players from Arizona allows for a great connection going in as a freshman.”

NMSU followed that up by earning a trio of Horizon Huskies to commit in offensive linemen Justin Segura (who also plays defense), Isaiah Murasalat and tight end Grant Mileski, who thrives as a blocker as well and is capable of playing on defense.

Segura told Jason Jewell he “wanted to play with my family. Thought it was the best firt for me being that it’s close to home and the coaching staff is amazing. I also took a visit with Isaiah and Grant and could really see myself playing there!”

Not only does New Mexico State get size, but experience and winning as well. Desert Edge won a state title in 2015 with Wilhite and Young on the line as sophomores, and Mursalat, Segura and Mileski have logged a lot of minutes for Horizon and are 7-1 on the year. Both the Desert Edge and Horizon program is synonymous with strong play in the trenches, and Scorpions head coach Jose Lucero and Horizon coach Ty Wisdom take pride in their line play.

Here’s what Sports360AZ recruiting expert Jason Jewell had to say:

I think New Mexico State got five very talented football players. These weren’t guys that just had offers from NMSU, they all had multiple offers.

The offensive line trio they got in Mursalat, Young and Wilhite will pay dividends for the Aggies down the road. All are 300 pounds and can play.

Segura is one of my favorite players in this entire class. He flat gets after it!

Mileski is a very good tight end that has the ability to play on defense if needed.

Only one other time have I seen three kids form the same high school commit to the same school on the same day and that happened last year at Saguaro when their guys all committed to Arizona State.

But to see NMSU haul in five commitments in two days, that kind of stuff usually only happens near signing day. Hats off to Cory Martin, who recruits Arizona, for a job well done.

Basically, the point I’m getting at is these five are like the Power Rangers, and they are going to form to be a nasty Megazord that opposing lines will have to deal with over the coming years.

Kai Golden, a talented defensive lineman from Marana Mountain View, will be visited the New Mexico State campus this weekend. At this point, the Aggie coaching staff might be showing off.