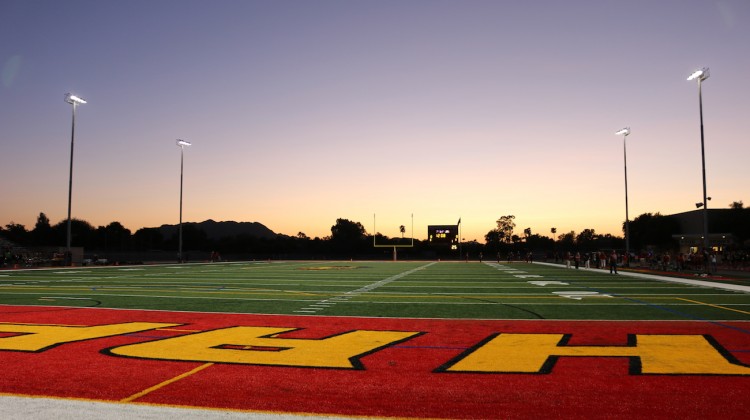 It’s that time of the year.

The two-year block has come out for the new conference alignments in high school sports. It’s a time for excitement at new potential match ups and a time for head scratchers. Here’s a few programs who made moves (or didn’t) that caught my eye.

We saw Chaparral and Liberty make the jump a few years ago to 6A…errr…. Division I. Both were competitive and I felt could have stayed up in 6A and been just fine. But with re-alignments in the last cycle, both moved back down to 5A. Well, they are back up to 6A, and I think they can be competitive.

Liberty has been one of the best teams that no one is talking about this year. Their only loss was a 28-25 loss to a very good Sunrise Mountain team, and the Lions have 61 tackles for loss and 48 sacks this year. My guy Jason Jewell raved about their secondary coming into this year, and the defense is giving up a little nine (!!!!) points per game.

The Firebirds have one of the most talented rosters in the state with three sophomores with Division I offers, and Coach Lewis told us earlier this year that about 60% of their starters are from the class of 2020. They have the talent, but they are young.

Queen Creek has been one of the most consistent programs in 5A over recent years and now they get to go up some really good 6A programs in their region with Mountain Pointe, Desert Ridge, Desert Vista and Highland. The Southeast Valley continues to see growth in quantity of numbers and quality of program.

8-0! Next week is a bye pic.twitter.com/tdblEFBghl

Huskies and Wolves Moving Down

Horizon and Desert Mountain are moving down to 5A, and I think that will benefit both programs. Horizon had some very bare years, and Ty Wisdom has come in and revitalized the program. They have an experienced group but have a lot of junior ballplayers on that team that can help build sustained success. The same goes for the Wolves over at Desert Mountain. Kedon Slovis is one of the most underrated quarterbacks in this state. He has a huge arm and takes care of the football.

That will make for a lot of good teams in very close proximity between Horizon, Desert Mountain and Notre Dame Prep.

There are plenty of changes to the 5A San Tan region:

First thing first, Casteel is a great white shark in a small pond at 3A. They should have moved up to higher divisions probably this year, but due to the way the alignment rules work, they were not able to do so. That led to walking a tightrope between getting reps for their players to be conditioned for the playoffs, getting tape for colleges and running up the score. They will have lots of opportunities to get tape against quality opponents in this division.

Higley has been one of the best 4A teams in recent years and are poised to make a run at the 4A title.

Gilbert is a program that is turning itself around thanks to the leadership of Derek Zellner.

5A San Tan could be a gauntlet over the coming years.

Both Saguaro and Centennial are staying put. Despite Centennial making the jump a few years ago in that gauntlet 17-team Division I and winning the state title, they came back down to 5A and have been a power ever since. Saguaro is staying in 4A despite Jason Mohns’ wishes. He told me and Haley Stesiak on the #FridayNight360AZ Preview Show earlier this year, he was hoping that the AIA would do the alignments by sport rather than by school and the Sabercat football team could move up to 5A.

That, obviously, wasn’t the case and the Sabercats will stay in 4A. I understand the importance of keeping the school’s athletic department consistent, but I feel like when a team wins a state title for literally a half-decade, that should garner a Super Mario-esque power up to a higher division. If there should be an exception, it should be the ‘Cats.

No better place in the state of Arizona to practice and play! #SagU @saguarofootball pic.twitter.com/99UY015a8r

Every time this process happens, there are always some head scratchers. Since the alignments are based around enrollment, non-competitive teams can still move up. In the case of Shadow Ridge (1-7) and Nogales (2-6), they make the jump to 6A. Empire in Tucson, who was a 3A team, made the same jump Casteel did to 5A. The only difference is Casteel may not give up 100 points this year and Empire is consistently around the .500 mark at 3A. The positive is teams can appeal the decision – whether they have moved up, down or have stayed put – with the AIA and those decisions will happen in the coming weeks.

All of these takeaways are well and good, BUT a lot could change based on the appeal process. We are still a ways to go, but these decisions definitely sparked plenty of debate.