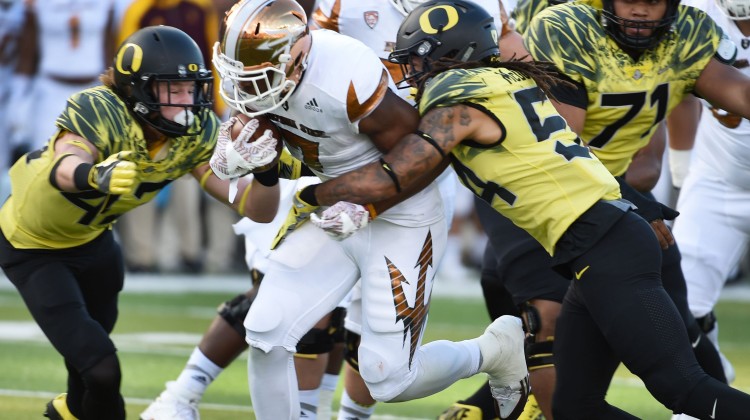 Arizona State coach Todd Graham said his team hasn’t accomplished anything yet, and he’s not wrong. The Sun Devils, however, have looked like a team with an identity the past two weeks.

This is Graham’s sixth season in Tempe, and ever since he arrived in 2012, he’s preached the same formula:

More often than not, it’s worked. And it sure has over the past two games, an upset win over Washington and a dominant victory at Utah.

Against the Huskies, ASU didn’t give the ball away, but it received great field position when freshman receiver Curtis Hodges blocked a punt in Washington territory. The Sun Devils also ran 24 more plays than their opponent in the first half of that game.

Graham always talks about college football being a week-to-week sport. In a conference with so much parity, letting up your guard for a week could be costly. Asked about keeping players focused, Graham responded in a broad way that symbolizes what his program is about.

“Good luck if you don’t have values,” Graham said.

ASU’s values are character, smart, discipline, tough. Those four words are written together in many places. Take a walk through the new Student-Athlete Facility and you can’t miss them.

When speaking to reporters, Graham basically implied this: How can the team lose focus when its culture heavily emphasizes discipline?

“Our guys get up at 5:30 in the morning, they’re here by 6 every day,” Graham said. “They live a pretty disciplined life. It’s kind of tough to stay up late and do things that are pretty counterproductive. That’s just the minimum standard stuff. This team has a lot invested.”

On the field specifically, Graham’s formula for winning has been successful the past two weeks. Take the snap numbers, for example. Graham said these are a result of stopping the run and running the ball well, and ASU displayed an ability to do those in both wins.

Washington’s Myles Gaskin ran for over 1,000 yards in each of his first two seasons at Washington. ASU only rushed for 40 yards in the win over the Huskies, but the defense held Gaskin to just 68 yards on 14 carries, his best run being just 17 yards.

On the flip side, ASU rushed for 205 yards against Utah, its second most in a game after rushing for 214 in a loss at Stanford. Senior running back Demario Richard said the Sun Devils are becoming more confident running the ball, largely due to young offensive linemen gaining game experience.

And it shows, especially because ASU ran a jumbo set against Utah in a few different short-yardage situations. The Utes are considered one of the conference’s top-3 most physical teams, but ASU didn’t appear to care.

“I would just say that’s, ‘You know what we’re going to run, we know what you’re going to do, mano-a-mano, big on big, let’s see who’s going to win,’” Wilkins said of the jumbo set. “In those situations, we know what it’s a mind frame as in you just got to put your head down and that’s just what we did.”

Added Richard on the formation: “You get (offensive linemen) Sam Jones and Cohl Cabral lined up in front of you, I know they’re hungry so they’re going to try and knock somebody’s head off. I’m short, so if I’m kind of running behind them, you lose me.”

ASU converted a few of those third-and-short situations with the jumbo formation, allowing for a longer time of possession. ASU leads the Pac-12 in that area, keeping the ball for 33:08 per game.

Not only does it give the defense a longer breather, but it means Wilkins does not have to throw for 350-400 yards with multiple touchdowns for ASU to win.

“When we can run the ball at ease and at will and stuff, it makes the game so much more enjoyable,” Wilkins said. “Just to be confident and know that you’re going to be successful with what you do.”

But Wilkins doesn’t take plays off when his teammates run the ball. He’s always trying to block for them, an area most quarterbacks avoid.

In the game at Stanford, sophomore receiver Kyle Williams took the handoff on an end-around play and as he dashed upfield, Wilkins laid a nice block on a Cardinal defender.

“He’s a great quarterback and a great leader and a guy that you’re going to want to play for,” Williams said of Wilkins. “He goes and puts his life out on the line, with his ailments and stuff in every game. You can’t do anything but respect the guy and appreciate what he does on the field.”

Asked about Wilkins’ blocking, Graham had this to say, perhaps a bit jokingly:

“A couple times, he’s given great effort towards blocking. I wouldn’t call them very dominating blocks.”

Graham, however, said Wilkins’ attitude and effort set the standard for the entire team. He said his quarterback is buying in, and while that isn’t to say he didn’t until now, there’s a difference in doing so at 100 percent.

Wilkins said that when ASU runs the ball, he sometimes sees defenders and knows that blocking them can help spring a touchdown. It seems that mindset would be had by everyone but a quarterback.

A quarterback sacrificing his body to block is just one example of the veteran leadership on this year’s team. Graham said older players show newcomers the way, letting them see what’s acceptable and what isn’t both on and off the field.

And more than anything over the past six years, Graham said, having a clear program culture and identity has helped strengthen his teams.

“That doesn’t mean anything. That doesn’t win you any games,” Graham said. “But we wouldn’t have been successful and beat the caliber of people we’ve beaten to this point if we weren’t accomplishing that.”