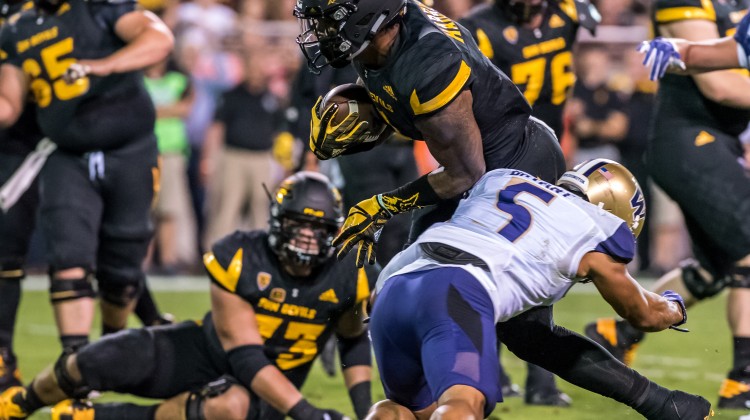 It still seems weird, but don’t expect that to change.

Arizona State took down No. 5 Washington, 13-7, on Saturday night. The Huskies entered undefeated and had completed half of their quest to return to the College Football Playoff.

Then, BAM! Those hopes took a major hit, thanks to the Sun Devils.

And it wasn’t that ASU beat Washington, though that was darn impressive. It’s how the Sun Devils did it.

Great defense. A low-scoring game. A clean contest that underdog ASU didn’t need to muck up.

ASU had a promising start when it went on a 16-play touchdown drive on its first possession. From there, though, it only used two Brandon Ruiz field goals.

All defense the rest of the way.

Some of the numbers were astonishing, too.

Washington had just 17 yards of offense — good for one first down — in the first quarter. ASU held the Huskies to 3 of 14 on third down. Quarterback Jake Browning posted his second-lowest quarterback rating in his last 28 games, in which he holds a 22-6 record.

A different ASU defense introduced itself to the college football world last night. It remains to be seen if we’ll ever see it again, but for now, it’s worth crediting.

This defense has been heavily criticized in the past couple seasons. ASU’s players and coaches have taken it but remained confident. They’ve spoken of a turnaround.

But week after week, the defense gave up big plays, large yardage totals and a ton of points. It seemed there was no change.

During the bye week, DJ Calhoun said he felt like ASU should be 5-0 and that its defense shot itself in the foot multiple times. He implied the unit wasn’t far away.

At least for this week, praise the defense.

No one saw this coming. ASU was supposed to be light stop in Washington’s schedule.

The Sun Devils made sure they were a roadblock. Again, the way they did so was as astonishing — if not more — than the result.

ASU’s offense struggled, but didn’t turn the ball over. Ruiz missed a late field goal that could’ve truly sealed the game, but it didn’t matter. The rest of the special teams played mistake-free, though ASU coach Todd Graham admitted there was one time where the unit kicked right to Dante Pettis, Washington’s best receiver and returner.

Washington entered the game almost a three-touchdown favorite over ASU. It’s often said that underdogs of that magnitude need to make all the plays they should, and some they shouldn’t.

Take this, for example. ASU faced a 4th-and-3 with precious time winding down in the fourth quarter. Washington was out of timeouts, so a first down would seal it.

In Washington territory, ASU could have — and maybe should have — punted. Nope. Not a chance. Graham later said he wanted to go for it and go for the win.

Junior quarterback Manny Wilkins threw through a few Huskies defenders and the ball somehow found tight end Ceejhay French-Love. The play looked as if a Husky could have streaked down the sideline with a pick-six.

Instead, the celebration started.

Fans stormed the field. There was no way security would hold them back. It was madness.

Wilkins said he’d never been a part of a crowd-storming. Graham has, but also said Saturday night was the best atmosphere he’s ever been associated with.

Following the final whistle, the crowd met the players at the north end zone. Fans and cheerleaders jumped around the players, who were embracing one another in pure joy.

All the talk about a struggling ASU team. All the speculation of whether Graham would be out the door after this season.

Curb it, at least until next Saturday.

During the postgame celebration, ASU players, coaches and the surrounding fans were all on cloud nine.

Can you blame them?