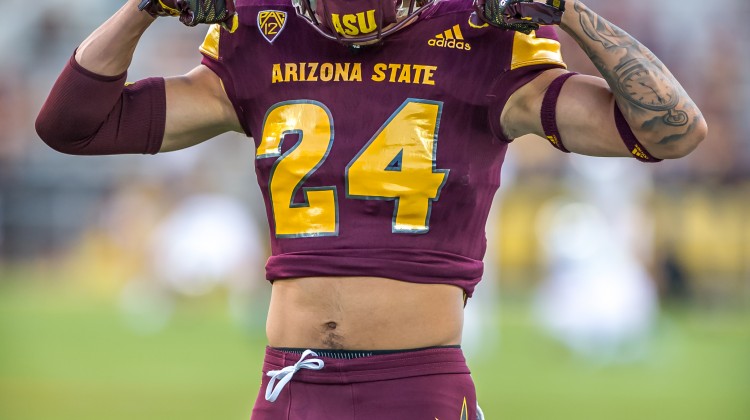 For the first time since 2004, Arizona State football defeated the Oregon Ducks. Saturday’s 37-35 win wasn’t without its flaws, but it was as complete a performance as the Sun Devils have put together all year.

Here are a few of my takeaways:

As I said, the win had its faults. ASU built a 31-14 lead, but Oregon scored 21 of the next 24 points to take its first lead of the game. Junior quarterback Manny Wilkins led a drive to get true freshman kicker Brandon Ruiz in field goal range for the game-winning kick. Big moment.

Right at the end of the first half, receiver Ryan Newsome muffed a punt, leading to an Oregon touchdown. Instead of leading 17-7 at the break, ASU led by just three points. The Sun Devils received the ball first after the half and scored two quick touchdowns as the defense continued to slow the Ducks. If not for that stretch, this game’s result could’ve been much different.

The point: ASU fought. In previous games, it caved in key spots. It failed to put together four quarters of good football. On Saturday, it got as close as it has all season. That’s a positive.

There has been ongoing debate about who should be the team’s starting quarterback. That should be over now, though. Manny Wilkins put together another impressive performance and now holds the school record for consecutive pass attempts without an interception, dating back to last season.

He threw a touchdown and ran for two more against Oregon. He evaded the rush when needed, he stepped up in the pocket at the right times. And perhaps most importantly and a big improvement for him, he’s giving sophomore receiver N’Keal Harry a chance. Once not so accurate on his deep balls, Wilkins is putting Harry in 50/50 situations. The past two games have been the best of Harry’s season, and perhaps even his career.

ASU mightily struggled getting off the field in its first three games. Early in Saturday’s game, Oregon scored a touchdown on third down. But overall, the Sun Devils held Oregon to just 1-for-11 on third down, a big key in slowing the Ducks. A potent, up-tempo and dangerous Oregon offense ran just 65 plays on Saturday night. ASU, in comparison, ran 92.

The offensive line performed better on Saturday, allowing Demario Richard and Kalen Ballage have a bit of running room. Oregon usually features a quick front seven and the offensive line seemed to take advantage by getting a nice push. In the win, folks saw what ASU’s offense could be when it established something that resembled a running game. Heading into the season, people discussed whether ASU could have two 1,000-yard rushers. It seems that won’t be the case, but ASU has a dangerous offense if it remains balanced. It has improved in that regard over the past two games.

The Sun Devils gave up 401 more yards of offense and a hefty amount of big plays, but they contained Oregon enough. The third down defense was huge. If ASU plays this type of defense throughout the rest of Pac-12 play, it will give itself a chance to win some games it perhaps shouldn’t.

Manny Wilkins had a couple close calls with interceptions, but didn’t turn the ball over. He completed 24 of 39 passes for 347 yards. He distributed the ball well. He was calculated with his risks when using his legs. He did everything ASU asked of him.

Kalen Ballage carried 12 times for 57 yards, but the best part of the night for ASU was Demario Richard’s 64 yards on 21 carries. It doesn’t appear the Sun Devils will be a team that runs all over defenses, but the past couple games have been a nice change of pace. ASU ran for 142 yards, a nice boost to a passing offense that seems it has found its stride. The Sun Devils showed some great balance as Richard ran for multiple first downs to better set up the passing game.

Receivers N’Keal Harry and Jalen Harvey carried the group to this grade. Harry had another career night with seven receptions for 170 yards and a touchdown. Harvey caught eight passes for 133 yards and it seems most of his receptions are for first downs. He’s become a reliable possession receiver whose role has expanded more than it ever has in his ASU career. Harry caught a few 50/50 balls, which fans and his teammates have come to expect. No tight end caught a pass, but with Jay Jay Wilson underperforming at the position then moving to defense, it seems there’s less emphasis on the tight ends. The run blocking on all accounts was much better last night, though.

Wilkins was sacked four times, but one or two could have been considered his fault for not getting the ball away. The pass protection has been better for the most part during the last two games. The line also got a forward push on Oregon’s front seven to create a bit of room for Richard and Ballage.

This grade was primarily because of Alani Latu, who has played lights out this year. He had five tackles — two for a loss — and a sack on Saturday. The defensive line also didn’t let Oregon’s physical offensive line blow open many holes. It was a solid performance. ASU will need this group against Stanford, too.

This group was impressive on Saturday. Christian Sam led the entire defense with 11 tackles — 1.5 for loss — and senior DJ Calhoun had eight total tackles. Spur J’Marcus Rhodes had four, one for a loss. ASU certainly missed Koron Crump because it’d be impossible not to be able to use a presence like that. Abe Thompson had a tackle and Jay Jay Wilson, who moved over from tight end, had two and earned the praise of coach Todd Graham. Together, the two helped fill Crump’s void.

Everyone knew this would be a difficult test for a young ASU secondary. That proved correct. Chase Lucas totaled eight tackles in his first career start and is only expected to improve in coverage. However, he was beat once for a touchdown. Kobe Williams was beat a few times. Das Tautalatasi had a bone-crushing hit, but also missed a tackle later in the game on a play that went for 51 yards. Oregon then scored its go-ahead touchdown. If ASU’s defense wants to take the next step, this group’s improvement will be key. That said, it may be unrealistic to expect anything other than growing paints from such an inexperienced unit. For the circumstances, it hasn’t been as bad as it could be, and that’s a positive.

This grade could’ve easily been an “A,” but Sleep-Dalton averaged just 37.1 yards on seven punts and Ryan Newsome muffed one, leading to an Oregon score. He’s averaging 37.9 yards per punt this season, No. 142 in the country. He’s down on the list near some quarterbacks who are pooch-punting. That’s not good. However, he’s shown flashes when healthy in practice, so this is an area ASU could easily turn around.

On the flip side, freshman kicker Brandon Ruiz made three field goals, including the game-winning one. Six of his seven kickoffs were touchbacks, which was key because Oregon entered the game first in the country in kick returns. It’ll be important moving forward because ASU plays in a conference in which most teams have returners who can make plays. Ruiz has been impressive as a freshman.

Twice is nice. NAU retained the Grand Canyon Trophy by defeating Southern Utah for the second time this season. https://t.co/ujp9InJhR6
View on Twitter
4
21