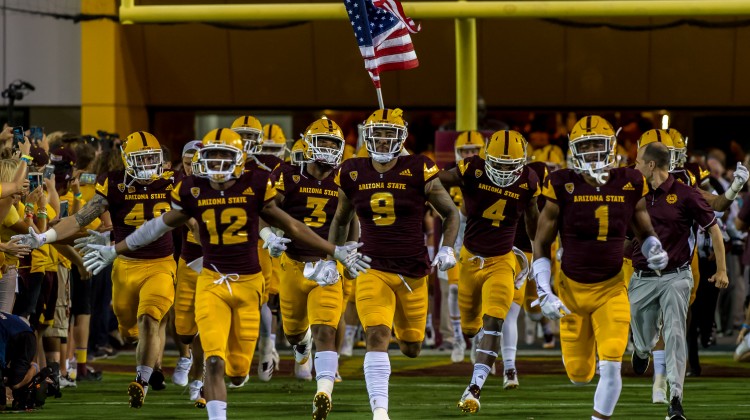 Arizona State sophomore receiver Kyle Williams had a breakout game at Texas Tech last Saturday, but he may not say much about that or how he’s managed to make a name for himself this fall.

“Going into this camp, I just felt like I was ready to prove something,” Williams said Tuesday. “Not only to myself, but to my team, and really just make a point.”

He won’t expand much more past that. Not about himself, at least.

When asked about his improvement this year, Williams says he’s more comfortable, but mostly credits the coaching. But when asked about junior quarterback Manny Wilkins’ improvement, Williams goes on for 30 seconds about Wilkins’ leadership, maturity and ability. Asked about the team’s mentality, he talks about how it’s a tight-knit group in the locker room.

Williams’ coaches and teammates talk him up plenty, though, and for good reason. He’s been one of ASU’s brightest spots this fall as he came out of nowhere to immediately crack the two-deep and hasn’t let go of his spot.

Throughout the fall, ASU players and coaches lauded Williams for his speed, intelligence and versatility. Receivers coach Rob Likens said he believes he can plug Williams in anywhere on the field and have him run any route.

That’s just what the Sun Devils did against Texas Tech. A slot receiver all last spring and this fall, the 5-foot-10, 178-pound Williams moved to the outside to fill the absence of starting receiver John Humphrey, who was sidelined with a knee injury suffered against San Diego State.

The result: seven receptions, 111 yards, two touchdowns. ASU may have lost and dropped to 1-2, but it officially gained a new weapon.

When Likens and Williams were at the podium Tuesday, Williams answered a question and just as a reporter was about to ask another, Likens got a word in.

“Let me just say something,” he said. “I’ve been coaching receivers for a long time, over 20 years. What this kid did, playing slot going through spring, going through fall camp, then moving outside in two days and playing outside receiver in a really big Division I football game, that’s pretty incredible. I don’t know if people know how hard that is. It’s a complete different position. Everything is different, and what he did the other night is spectacular.”

Right after saying that, Likens was asked about Williams’ intelligence.

“I don’t know if you guys know this, but this guy’s going to be a surgeon one day,” Likens said of the honors student sitting next to him.

Williams’ smarts certainly show up on the field, too.

“His ability for me to just talk about something and not even have to demonstrate and him to go out and physically do it, it’s pretty special,” Likens said.

Wilkins hit Williams on a 54-yard deep ball last Saturday. When watching film, Wilkins noticed Williams could have had another touchdown if he threw the ball 5 or 6 yards further.

Wilkins acknowledged it was his fault because Williams did his job.

“If you watch that route, it’s 110 percent how you coach (it) throughout,” Wilkins said of Williams. “He pays attention to the little details, which is something the coaches know and I know.”

Now that he’s played both in the slot and outside, Williams has added versatility in his route-running. He said it’s been fun expanding his toolbox by running different routes.

He ran a perfect stutter-go route last Saturday, something he’d hardly done — if ever — in a game because he had only played in the slot.

“Definitely cool and looking forward to running more routes like that, going deep and stuff,” Williams said. “In the slot, we do a lot of intermediate stuff, but you have to stretch the field outside.”

To this point, no one at ASU has handed anything to Williams. There was a time last season when he practiced with the defensive backs.

He appeared in 11 games in 2016, but didn’t establish himself. He caught three passes for 21 yards in a loss at Oregon and recorded two receptions for 30 yards in a blowout loss at Washington. He’s already hauled in 14 passes for 200 yards this season, figuring to be a big piece of ASU’s offense.

He’s earned it, though. Wilkins called Williams a “workhorse.”

“That dude busts his butt in practice every day, doesn’t say a word,” Wilkins said. “Doesn’t say he’s sore, doesn’t say he’s tired. When the coaches ask him to do something, he gives his all every single time. It was good to see him — when the opportunity presented itself — take advantage of it.”

Likens said ASU football has a simple saying. The players know it and the coaches use it when drawing up concepts and plays for an upcoming game.

“If you deserve the ball, you’re going to get it,” he said.
Few on the team are perhaps more deserving than Williams.