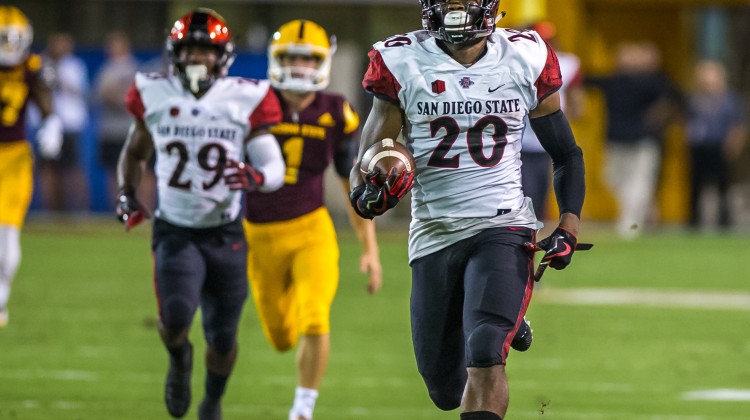 Arizona State suffered a 30-20 loss to San Diego State at Sun Devil Stadium on Saturday night. There may have been a few tough-to-spot positives, but the negatives surely outweighed them.

Here are each position group’s grades:

In my opinion, Manny Wilkins wasn’t bad. He missed a deep ball to John Humphrey in the third quarter that probably could’ve been six points. But a few plays later, he put it on the money on another deep route and Humphrey dropped it. I believe Wilkins took what he could get. San Diego State’s defense did a good job of bottling up ASU. The offensive line (grade to come) wasn’t good. Wilkins had to spin to evade the pressure more times than any quarterback should ever need to. There were plays he could have made, but put quite simply: You can’t miss an opportunity if you don’t have one.

I gave this grade because of the lack of production. I don’t think the running backs were bad by any stretch. However, Kalen Ballage can’t do it all himself. Rashaad Penny may have, but he has the blocking. Ballage didn’t have the holes Penny did. There was no way he could’ve run free like that. Nick Ralston entered the game because Ballage was “dinged up,” per ASU coach Todd Graham. Ralston carried three times for 18 yards, but he couldn’t do much more because ASU needed to air it out during the time he was in the game. Demario Richard didn’t play due to injury. It was a lackluster performance on the ground for a team that talked about its commitment to the running game.

I actually don’t think the receivers were bad. I didn’t give them a higher grade because there wasn’t much production on the scoreboard, but they did some good things. N’Keal Harry caught a nice end zone fade. If ASU continues to dial that up, I don’t know who’ll stop the 6-foot-4 Harry in the red zone. Kyle Williams caught a couple passes, one of them on a nice crossing route. However, John Humphrey didn’t catch a pass and was eventually injured. Ryan Newsome didn’t play due to injury. As the running backs were, the receivers had limited opportunity.

The offensive line only gave up five sacks against the Aztecs, as opposed to the seven it allowed against New Mexico State. Same difference, really. ASU had miscues all over the field on Saturday, but this group’s poor play really held it back. Wilkins didn’t have enough time. There were no holes for Ballage. It wasn’t pretty. All week, people said this line couldn’t play like it did against New Mexico State. It did, and we all saw the result. The poor protection isn’t the only thing to blame, but it’s important. If you need a comparison, look at the San Diego State offensive line. The Aztecs replaced four starters in that unit and they’ve picked up like nothing happened. ASU needs to figure out its line or Pac-12 play won’t be pretty.

Now, let’s move to the defensive side of the ball….

There were missed tackles and miscues on Saturday, but this group played well for parts of the game. JoJo Wicker played well, and Tashon Smallwood and A.J. Latu had their moments. However, the missed tackles held them back. And understandably, the defensive line looked gassed by the end of the game. Can you blame them? The offense was hardly on the field in stretches.

This group had good moments, but there were missed tackles. Christian Sam didn’t have a great night when ASU perhaps needed him most — to stop the run. J’Marcus Rhodes made a few good plays. DJ Calhoun appeared relatively quiet. I expected a bit more from this group in the effort to stop the Aztecs’ running game. However, San Diego State’s offensive line and fullback paved the way — literally.

I gave this group a straight B because it didn’t have much opportunity to get bludgeoned. San Diego State hardly threw the ball. It didn’t need to. But when it did, the secondary made some nice plays. Das Tautalatasi had a nice pass breakup on third down. Joey Bryant and Chad Adams each had a couple key third-down tackles. Still, mistakes were made. ASU dropped a corner back and shifted a safety over on a key 3rd-and-21, allowing San Diego State to throw to a wide-open Penny, which became an easy score.

This grade is so bad because ASU didn’t do much good. San Diego State’s John Baron kicked a ton of touchbacks, which didn’t allow ASU opportunities to return. On the negative side, ASU gave up a return touchdown. Punter Michael Sleep-Dalton had a 12-yard shank. Special teams were not good.

Why the grades were what they were:

If you read through all the grades, you’ll notice they’re pretty even. The offensive line and special teams both received a “D,” but other than those, the others are somewhat similar. That’s because I feel a lot of factors played into the loss. The offensive line play was horrible, but Humphrey dropped a sure touchdown pass that would’ve put ASU ahead. Penny ran wild, but the defensive linemen looked terribly tired. Once again, can’t blame them. My point: I don’t think you can pin the loss on one single area. ASU made mistakes everywhere.