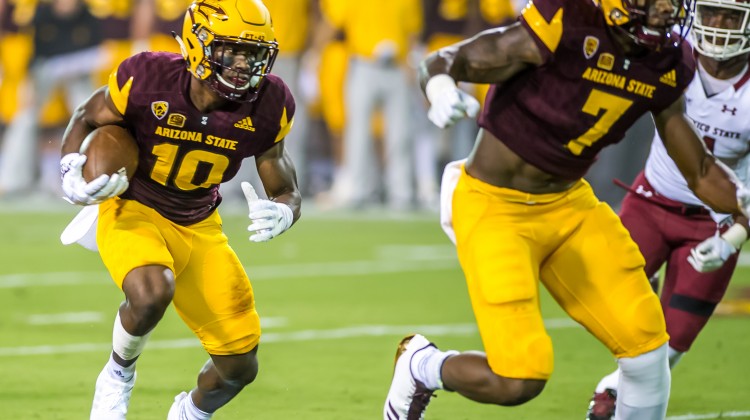 Arizona State opened the 2017 season with a 37-31 win over New Mexico State last Thursday. The Sun Devils flashed potential on both sides of the ball, but it wasn’t pretty by any stretch.

The Sun Devils host San Diego State this Saturday. If you don’t know, I’m from San Diego. And because ASU played on a Thursday, I went home for a couple days to visit family this past weekend. I saw the Aztecs defeat UC Davis 38-17 in person on Saturday.

SDSU lost running back Donnel Pumphrey, the NCAA’s all-time leader in career rushing yards. When looking at the SDSU-ASU matchup, you still can’t skip the running back position. The Aztecs return Rashaad Penny, who rushed for 197 yards and two touchdowns in the season opener.

Penny is a larger back than Pumphrey, but features the same type of quickness. He hits the hole well and his burst in the open field is a problem for defenses. He also has five career return touchdowns, the most of any active player in the FBS. He seems like the real deal.

SDSU relies on its running game. Saturday should be no different.

“Old-school really, just old-school,” ASU coach Todd Graham said of the Aztecs’ running game at his Monday press conference. “Similar to kind of a blend between Stanford and what Boise (State) has done in the past … More in lines with what Stanford does. They’re going to ground and pound and run play-action pass and they have great tailbacks. They have great blocking backs, their fullback is a big guy.”

Don’t stop at Penny, though. Juwan Washington, a 5-foot-7 sophomore back, should also play a role in Saturday’s outcome. ASU receiver Ryan Newsome knows Washington personally and is high on him.

“We’ll probably have the toughest time trying to tackle him,” Newsome said, somewhat on behalf of the defense.

The Aztecs have had back-to-back 11-win seasons. They beat Houston 34-10 in last year’s Las Vegas Bowl. San Diego State is a program that’s been accustomed to winning recently.

It isn’t the same team, however. If it’s the same running game remains to be seen. SDSU lost four of its starting offensive linemen from last season, an area ASU could exploit.

Yes, the Sun Devils field a young secondary. Their front seven, however, looks as if it could be dominant at times this season.

Here’s another reason I believe ASU fans shouldn’t fret: SDSU doesn’t seem to have the type of offense that’ll run the Sun Devils out of the building.

In about a week, we’ll be pondering whether an inexperienced ASU secondary can hang with Texas Tech’s Air Raid offense. For now, Saturday is the focus.

The Aztecs won’t throw over the top much — if at all. Their pro-style offense is predicated on the running game and using it to set up the play-action pass.

Chapman seems to serve his purpose within the Aztecs’ run-heavy offense, though.

Perhaps that means ASU can get away with not subbing much on defense. The Sun Devils didn’t rotate players in on defense until the fourth quarter in the season opener.

“That is what we expect. All of us,” defensive lineman Tashon Smallwood said after Thursday’s game. “The starting 11 is expected to play all the snaps. It was really no surprise.”

Graham on Monday talked about the lack of substitution on defense and said he trusts his depth. But he said defensive coordinator Phil Bennett wanted to send a message by having the 11 starters play a majority of the snaps.

Regardless of the message sent, it seems a bit odd that ASU didn’t substitute much. Coaches have lauded players like linebackers Khaylan Thomas, Abraham Thompson and Deion Guignard — all backups — this fall. Throw defensive linemen Renell Wren, George Lea and Shannon Forman in that group.

Though defensive depth was a concern heading into the season, it seemed ASU had players who could surprise. The season opener put that in question.

Consider this: The Sun Devils led 37-13. They never scored again, but New Mexico State did. The Aggies ended with 31 points.

“When we got a three-score lead, we need to close it out,” Graham said after the game. “But that’s probably my fault for taking our guys out too soon. I got a little bit conservative.”

His fault or not, the points were scored on the second-team defense. Yes, the players who are supposed to provide some depth. However, Graham did qualify on Monday that he hardly rotates defensive backs and linebackers. Only defensive linemen.

Luckily for the Sun Devils, SDSU head coach Rocky Long doesn’t seem to think highly of some of his backups. The Aztecs once led 38-3, but gave up two touchdowns before the final whistle.

Long told San Diego reporters this year’s defense is his “youngest by far” since taking over in 2011. Tariq Thompson, a freshman, starts at safety, though he did intercept a pass last weekend.

But Long’s impressions of the third-teamers he fielded?

“They were hooooooorible,” Long told reporters after the game.

It’s up to ASU to take advantage of a young SDSU defense. Can they? Sure. Senior running back Demario Richard’s status remains in question, but fellow senior back Kalen Ballage carried much of the load against the Aggies anyways.

On the other hand, the offense struggled at points in the opener. After scoring a quick 14 points in the first quarter, ASU didn’t score on its next five drives, allowing the Aggies to pull within a point. And nothing against New Mexico State, but SDSU’s defense will almost certainly be better.

ASU on Saturday will honor legendary coach Frank Kush, who passed away at age 88 this June. Kush is a symbol of toughness for the program. Graham always dubs Kush as “the most influential man in program history.”

It seems fitting that ASU’s opponent probably won’t throw the ball all over the field. Instead, the Aztecs will ground and pound. ASU will need to win the physicality battle.

Let’s see if the Sun Devils do Kush justice.