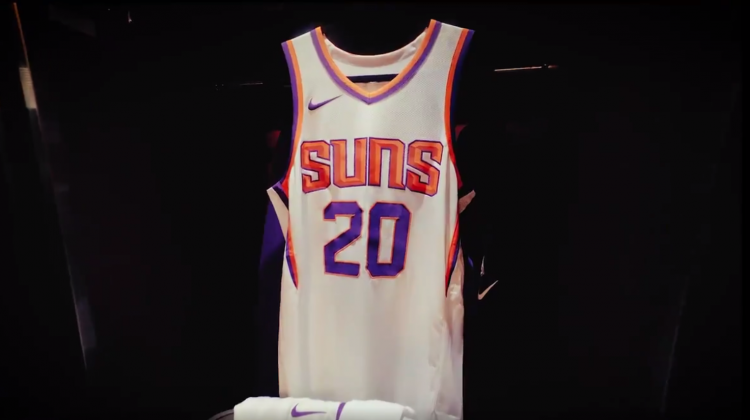 It’s a new way of thinking and a new approach to building the roster for the Phoenix Suns. A complete commitment to youth and building a team in a sustainable way through the draft and building homegrown stars.

It’s pretty obvious the Suns have turned the page in an effort to build the next great team for the storied franchise. With a new mindset comes a new look. A group of uniforms the team’s young core of Devin Booker, Josh Jackson, Marquese Chriss and Dragan Bender can help define the meaning of.

Don’t worry though, the young Suns will carry the history of the team with them in the uniforms they wear.

“We wanted a very contemporary, classic look that we felt would resonate with our fans,”said Nic Barlage Suns Senior Vice President and Chief Sales Officer who oversaw the process. “NIKE nailed it.”

The new design comes as NIKE officially takes over the NBA’s uniform contract this season. The process of developing the Suns new Association (White) and Icon (Purple) uniforms was a collaboration between the team and the new league partner that took a full 18 months to come to fruition.

“It was really collaborative in every sense of the word,” said Barlage. “ We provided some overall direction right away. NIKE went into their lab and they came back with a few offerings. We centered on one really quickly. The process was way smoother than I could have anticipated based on the first designs. It’s pretty flawless. I think the media, our fans, and the market will love it.”

Just like Hollywood’s obsession with bringing back the classics that everyone loves — just look at NBC wanting to bring back every successful show from the last 15 years — the Suns have returned a fan favorite back to it’s rightful place. Purple is back on the home white uniforms and, if I do say so myself, it looks gorgeous.

“I can’t tell you how many times I’ve heard from fans ‘bring the purple back’”, Barlage said with a chuckle. “It’s why we brought it back to the court a year ago. It adds a richness to our jerseys that connect us to our history and our heritage that we haven’t had in awhile.”

The most interesting thing? You could see more than just the purple piping on the white uniforms at Talking Stick Resort Arena this year. The Icon purple jersey may make an appearance as well. As part of the new NIKE partnership the league has decided to let the home team decide which of their jerseys they’ll wear at home. Don’t expect interactive voting on the day of the game to decide what color a team will wear. The entire list must be submitted to teams in August so equipment managers have time to prepare for the now increased amount of laundry and packing they’ll have to do.

While both jerseys are striking in how clean and classic they are — think Yankees pinstripes or Celtics green and white — it’s the shorts that stand out most. These are easily the best we’ve seen the team wear since the original Sunburst shorts the team wore from 1968-1992. They have sharp lines and a new unique design at the hip.

These won’t be the only uniforms the Suns unveil before the start of the season. NIKE has announced that each team will release two more uniforms versions (the Athlete Mindset and Community) and that eight teams will have a “classic” kit. With the team celebrating their 50th anniversary along with the Bucks, it’s a pretty safe bet that both teams will be included in that group. They’ll likely be released in September with training camp starting at the end of that month.

While we haven’t seen all of the uniforms, it’s safe to say that this is a great start. #TheTimeline deserved a chance to visually distance itself from the last 7 years and a chance to define a new brand for the team. The Suns and NIKE managed to accomplish that while connecting to the team’s past.

“It’s a transcendent look that encompasses our 50 years as a franchise and sets us up for a bright future,” Barlage shared.

In the end a uniform is only as good as what happens in them. It’s why fans who grew up with the Sunderella Suns will tell you the Western font jerseys are the best ever, those who grew up with Sir Charles love the sunburst and anyone who was a kid during the Seven Seconds or Less years will say those uniforms reign supreme. It’s up to Booker and the young Suns to shape what these jersey and shorts mean to fans. Let’s hope it’s something truly special.