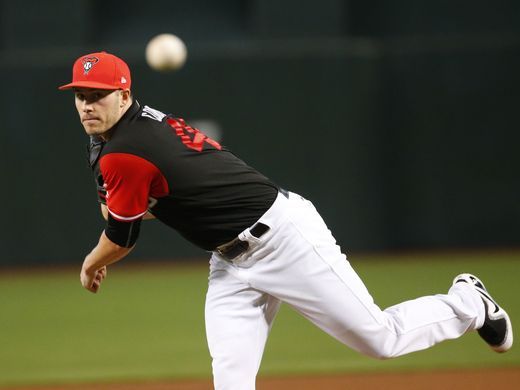 The Arizona Diamondbacks had to go through the gauntlet portion of the schedule. From July 27th-August 20th, the Snakes went 9-14 before winning six of their last seven in a series win against the Mets and a sweep of the San Francisco Giants.

Here are a few takeaways from the series sweep.

Paul Goldschmidt is having an MVP-caliber year, and America’s first baseman flexed his muscle this series, hitting two three-run home runs in Friday and Sunday’s games. J.D. Martinez was protecting Goldschmidt in the lineup and teed off three solo home runs this series as well.

Remember when Patrick Corbin was the shakiest pitcher in the Diamondbacks rotation? That seems like ages ago now. In Corbin’s last four starts, he has thrown 30.1 innings, giving up one run while walking five and striking out 29 batters. With Greinke and Taijuan Walker getting back on track and Robbie Ray returning to the rotation, the starting rotation seems to be clicking at the right time.

Speaking of Taijuan Walker, he earned his first win since June 21st and his first home win since April 27th. Walker threw 6.1 innings and stuck out three while giving up just one run. He has allowed three earned runs or fewer in second of his eight starts post All-Star game.

Closer Fernando Rodney has converted 11 straight saves and converted two saves in the Giants series and five for the week.

The Diamondbacks have an off-day on Monday before hosting the Los Angeles Dodgers, who have run away with the division but have mutliple players on the disabled list including Clayton Kershaw, who is eyeing a return soon, Cody Bellinger, Alex Wood and Yu Darvish returned to the rotation on Sunday. The Diamdondbacks have Zack Godley, Robbie Ray and Zack Greinke scheduled to toe the rubber against Rich Hill, Hyun-Jin Ryu and Kenta Maeda in the three-game set.

Want more D-backs content? Check out the Diamonds In The Desert Podcast.