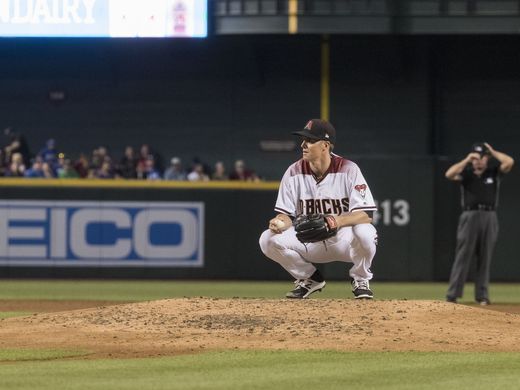 The Arizona Diamondbacks avoided the sweep against the Los Angeles Dodgers with a big win on Tuesday, but failed to capitalize on Wednesday and Thursday dropping the series.

Tuesday night, Zack Godley had a pretty good outing in his 6 2/3 innings on the bump, allowing three runs on eight hits. Godley’s proven to be a key part of this rotation since he was brought up from Triple-A after Shelby Miller underwent elbow surgery.

“He holds offensive teams down,” manager Torey Lovullo said. “If you want to start with a curveball, you can, you can also talk about a cutter, a two-seam fastball. He’s been tremendous for us. I can’t say enough about what he does.”

Another quality start from @godleyzt. Let's get some runs. pic.twitter.com/8YB7emUnqj

Zack Greinke looked good through six innings on Wednesday night, but in the seventh inning allowed two runs that allowed the Dodgers to edge the Dbacks in game two.

“I thought Zack threw the ball well,” Lovullo said post-game on Wednesday. “He had a number of early count-outs that allowed him to work deep into the game. He told me he felt great, and I wanted him to go out there and finish that inning, unfortunately that didn’t happen.”

"I wanted (Greinke) to finish that inning; unfortunately it didn't happen." — Torrey Lovullo after the @Dbacks' 3-2 loss to the #Dodgers. pic.twitter.com/zCnQlD8IwQ

With Robbie Ray still not 100% after being hit in the head two weeks ago in St. Louis, Anthony Banda got his third career start for the Dbacks on Thursday.

Banda allowed three runs in the first, then found a rhythm through the next three innings, but was replaced by pinch hitter Brandon Drury in the bottom of the fourth with two men on.

“Anthony Banda, I felt like had that rough first inning and then really fell into a nice groove,” Lovullo said on Thursday. “Removing him after four innings, I just felt like in that situation we were going to try and turn the lineup over…I felt like we had a chance to potentially break the game open.”

On Tuesday, Jake Lamb went yard twice to help the Diamondbacks take game one against the Dodgers, 6-3.

Lamb hit his first home run of the night in the fifth to put the Dbacks within one, then in the seventh with an awkward swing of the bat, hit a grand slam just over Yasiel Puig’s head in right field to give the Dbacks the lead.

J.D. Martinez showed some consistency in the box during this series. Martinez had a clutch two-out RBI double on Wednesday to put the Dbacks ahead in the sixth and a home run on Thursday to put the Dbacks within one in the fourth. Unfortunately, nothing else was clicking with the rest of the lineup to back up Martinez’s performance.

Martinez now has six home runs with the Diamondbacks this year.

Marte Key at the Plate

Since his return from the Bereavement List, Ketel Marte has been key for the Dbacks at the plate.

On Thursday night, Marte extended his hit streak to 10 games. The infielder had some timely hits that helped keep the Diamondbacks in the game late, one being a two-RBI single in the eighth, but as with Martinez, nothing else was going for the Dbacks.

Ketel Marte drives in a pair and the #Dbacks have the tying run at the plate in the 8th. pic.twitter.com/Fop4x0NdIi

This is Dbacks’ House

The Diamondbacks are well aware of where they stand against the Dodgers. Nonetheless, Tuesday’s win brought out the passion Archie Bradley has for this Dbacks team.

The boos and Dodger chants filled the stadium throughout the game, but were quieted once Lamb hit the grand slam and silenced when Bradley went one-two-three in the eighth.

Bradley was fired up, shouting ‘This is our house’ as he made his way to the dugout.

The challenging stretch continues on Friday when the Cubs come to town.

Sande Charles @sandecharles
Wednesday, January 22nd, 2020 at 5:15am
Can’t wait to see what these teams do on the field! Always fun chatting with @devonhenry77 and @EricSports360AZ 🙌🏻 https://t.co/dDzIBtUgj7
View on Twitter

doug Retweeted · Jordan Hamm @JordyHamm
Wednesday, January 22nd, 2020 at 5:07am
On this week's #RecruitingRoundup - @bradcesmat and I go over the latest visits and offers as we get closer to February Signing Day.

Sports360AZ Retweeted · Jordan Hamm @JordyHamm
Wednesday, January 22nd, 2020 at 5:05am
On this week's #RecruitingRoundup - @bradcesmat and I go over the latest visits and offers as we get closer to February Signing Day.

In reply toBrett Berger
Wednesday, January 22nd, 2020 at 4:50am
@brettberger @BergerCade @perrypumas @Sports360AZ Awesome man! Its super amazing that Cade has a father like you always pointing to humility, team, and doing things the right way!!
View on Twitter