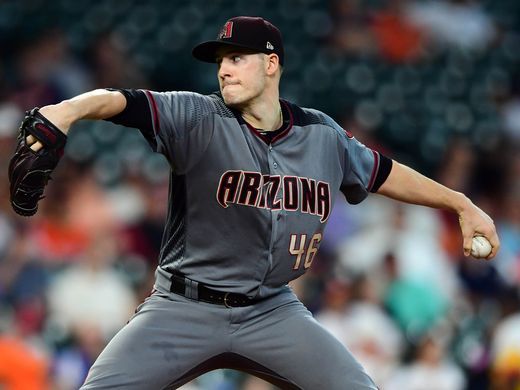 The Arizona Diamondbacks split the four-game series against the Houston Astros, taking game one and game four to improve to 67-54 in 2017. Here’s the takeaways and updates on the last four days of Diamondbacks baseball:

Patrick Corbin hasn’t been stellar on the road for the D-backs, but on Thursday, he dominated against the Astros in Minute Maid Park.

“He held a very offensive team in check,” Lovullo told the media in Houston on Thursday. “He probably should have thrown 10-12 less pitches if we played better defense…He made pitches and he shut out a very good ball club.”

Let's hear from the man of the hour, @PatrickCorbin46. @Dbacks split with Astros. pic.twitter.com/JOjuCr3VrS

Zack Greinke doesn’t like to lose. When taking the bump after a Diamondbacks’ loss, the ace has nine-straight wins. Monday night, Greinke went six 2/3 innings and allowed five hits with nine strikeouts to help solidify the D-backs 2-0 win.

Inside the Park Homers

Daniel Descalso hit the Diamondbacks’ third inside the park home run of the season on Thursday.

Ketel Marte hit the D-backs first of the year on July 26 at Chase Field against the Braves. David Peralta hit the second of the season five days ago against the Cubs in Phoenix.

The Diamondbacks series’ with the Dodgers and Cubs and two games with the Astros at Chase Field proved to be as challenging as was anticipated.

Corbin’s outing on Thursday was another instance of momentum that the D-backs will hope to capitalize on in the next series against the Twins beginning on Friday.

On Wednesday evening, the Diamondbacks reinstated David Peralta from Paternity Leave and optioned Anthony Banda to Triple-A Reno. Banda was brought back up to the D-backs after Robbie Ray went to the Concussion DL at the end of July.

Banda started against the Astros on Tuesday for his third start in Ray’s rotation spot. The lefty went four innings giving up eight runs on nine hits. The game got away from Banda early in the second where he gave up five runs.

“Anthony never really found a rhythm,” Lovullo said. “I think the mound presence, the ability to rebound, to make adjustments, pitch to pitch it’s been evident. Today he just couldn’t get grounded and try to deposit a direction. Is it a youthful mistake? Maybe, but I know that we’ve seen all sorts of pitchers have those types of moments.”

Not a great inning, but there's plenty of baseball left.

Goldy leads off for the #Dbacks. pic.twitter.com/QEcDgwrKp2

Banda got his first MLB win against the Giants on August 4, where he went six innings and only gave up one run on three hits. He struggled in his second start against the Dodgers last week. After Tuesday’s loss Banda acknowledged the adjustments that he still needs to make.

“It was a matter of a bunch of factors,” Banda said of Tuesday’s struggle. “Missing spots, doing different things as far as what we wanted to do (and) not establishing inside enough. It’s something you adjust to and I didn’t make the adjustment, but you live and you learn and you move on. I’m learning from this.”

Lovullo announced on Thursday prior to the Diamondbacks game with the Astros that Rubby De La Rosa would be undergoing a second Tommy John surgery. De La Rosa tried stem cell treatment and a rehab regimen to try to avoid the surgery, but after continued issues has opted for TJ.

Yasmany Tomás had a set back in his rehab for a strained right groin and has decided to visit a specialist in Philadelphia, MLB.com’s Steve Gilbert reported on Thursday. Since being placed on the DL at the beginning of June, Tomás was making improvements, but after still experiencing discomfort is taking precautions with the injury, Lovullo said.

Robbie Ray is scheduled for a rehab start in Double-A Visalia on Thursday evening. Ray will go five innings or 75 pitches, then will be evaluated.