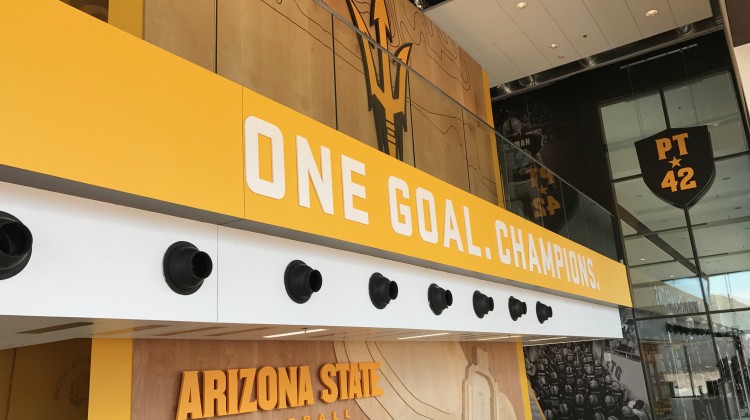 Arizona State football coach Todd Graham led the media on a tour of the program’s new Student-Athlete facility. He spoke for about 25 minutes at his preseason press conference. Here are my six takeaways as we get ready for Pac-12 Football Media Day next week in LA:

Frank Kush, who is regarded as the best coach in ASU football history, recently passed away at the age of 88. Graham spoke about Kush a lot on Thursday. After discussing a wall dedicated to Kush during the tour, Graham ended with this: “We want to be Sun Devil tough and this wall is dedicated to the toughest Sun Devil ever.”

During his press conference, Graham laughed about how Kush used to call him “soft.” He also lauded one of Kush’s defining characteristics: His love of football.

“I wanted to share this story because I think it’s something the fans would value,” Graham said. “He would forget some things, but he could remember every single play. He would ask me, ‘Why would you do this? Why on third down with two are you doing this?’ The things that you are passionate about are the things that he held on to. It’s an honor for me to get to coach here. That’s why it’s so important to me.”

Football coaches win games with Xs and Os, but they win fan bases and administrators with their off-field actions, including how they remember and take from who came before them. Embracing the past is a large part of college sports. Graham has surely done that throughout his tenure at ASU. Graham said he sought out Kush and wanted to have a relationship with the legendary coach. He eventually learned from Kush, and now, their relationship is something he remembers fondly.

"We want to be Sun Devil tough and this wall is dedicated to the toughest guy who ever worked here." Graham on Kush wall@DevilsDigest pic.twitter.com/kY4eyY6Z3n

The facility obviously caters to developing ASU’s current student-athletes, but I found it unique that it embraces the program’s past in neat ways. Graham’s favorite wall is one honoring all former Sun Devils who served in the military. The “Kush Wall” remembers the late Frank Kush and his legendary contributions to the program. There are different walls throughout the facility showcasing different Sun Devil greats — all-academic, Sun Devils in the NFL, you name it. Additionally, Pat Tillman’s image sits at the top of one particular stairwell as something people see when heading to the second floor of the facility. There are also images of some of the best former Sun Devils at each position in the position meeting rooms. The facility provides a great place to develop current Sun Devils, but it’s neat that it ties in the past well.

Graham's favorite place in the building is this wall of former Sun Devils who served in the military. @DevilsDigest pic.twitter.com/e3FnBcDx0O

Graham tabbed teaching as an emphasis of the new building. After all, a coach is a teacher. When asked about why teaching was a large emphasis, Graham said “it’s our plan to win.” He said ASU isn’t going to beat every opponent off talent alone, so they need to fill in the gap somewhere.

“Our plan to win is to out-teach, out-smart, to out-discipline, to out-character our opponent,” Graham said, referencing the four pillars of the program. “We think that that’s something that makes you unique. That’s our plan to win in this conference, which is a huge challenge to do. We have done that in the past and the key is that our teams were extremely disciplined and we played very smart football.”

Graham on the position rooms. pic.twitter.com/cTi97o0xtl

Graham said he and his staff believe the smarter player is the better player, which is why there’s such a large emphasis on using the technology in the team and meeting rooms.

There are smart boards and smart TVs, but that seems to be the norm today. Instead, what caught my attention was when Graham discussed how players can learn during and after position meetings. In the position-specific rooms, coaches can press a button to record the entire meeting, allowing players to eventually watch that meeting over and over on their iPads when they get home.

This is beneficial for a number of reasons. First of all, freshmen are new to college football and installing the scheme isn’t easy. This gives them a way to continually study. Additionally, Graham said multiple times throughout the tour that players often lose focus when a coach is just talking and talking. They don’t want to hear the coach ramble, but would prefer to watch the meeting and study the concepts themselves. Everyone knows young adults tend to lose focus sometimes, and this will help with that. There is also a command room, where Graham can see every position room at once on the same screen.

If you’ve followed ASU for some time, you’re probably aware of the school being named No. 1 in the U.S News & World Report’s list of the “Most Innovative Schools.” Students and fans often use the “No. 1 in innovation” joke, but it’s no joke when it comes to these facilities. Graham said in terms of blending technology with training methods to develop student-athletes, the new facility is “second to none” and “the best he’s ever seen or been around.”

Todd Graham speaks about the new facility. Calls it the "best he's ever seen or been around." @DevilsDigest pic.twitter.com/3dtClG1NAw

Wilkins In the Driver’s Seat

During his press conference, Graham was asked about the quarterbacks. His response: “We have a returning starter and he’s the starting quarterback until somebody beats him out.” There was a lot of talk about transfer quarterback Blake Barnett, a former 5-star recruit, and what he would bring. But it appears as if he hasn’t shown it thus far.

Spring ball is always difficult for transfers because they have to get accustomed to a new system while still trying to perform to their capability. Barnett will have a much better shot to show what he can do in the fall, but it’s Wilkins’ job to lose.

Graham said redshirt sophomore quarterback Brady White, who suffered a season-ending broken foot in 2016, is still recovering. Graham said he doesn’t project White will make it back this season, but he’s not labeling him as “out for the year.” White’s recovery was supposed to take 12 months, and the 12-month mark will be in mid-October.

Graham said senior running back Kalen Ballage, junior defensive lineman JoJo Wicker and redshirt junior offensive lineman Sam Jones have been named team captains, but he may add a fourth. Jones broke the rock on Wednesday morning, signifying the end of summer workouts. After he broke the rock, ASU strength coach Shawn Griswold said Jones “exudes everything it means to be a Sun Devil.” The secondary is full of question marks, so ASU’s defensive success will need to start up front, which is why Wicker having a better season than he did in 2016 is critical. Ballage is the team’s most-anticipated NFL Draft prospect, and although seemingly a quiet personality, has been a leader.

There are a few options if Graham decides to add a fourth captain. In my opinion, the most obvious is senior running back Demario Richard. Another could be redshirt junior Manny Wilkins, who has seemingly been a solid leader for the team since earning the starting quarterback job before last year’s season opener against Northern Arizona. On the other side of the ball, one option is senior defensive lineman Tashon Smallwood and another is senior linebacker D.J. Calhoun. Smallwood is notorious for his extra work after practices and Calhoun may have the biggest statistical year on ASU’s defense — he’s certainly in the conversation with Wicker and linebacker Koron Crump.