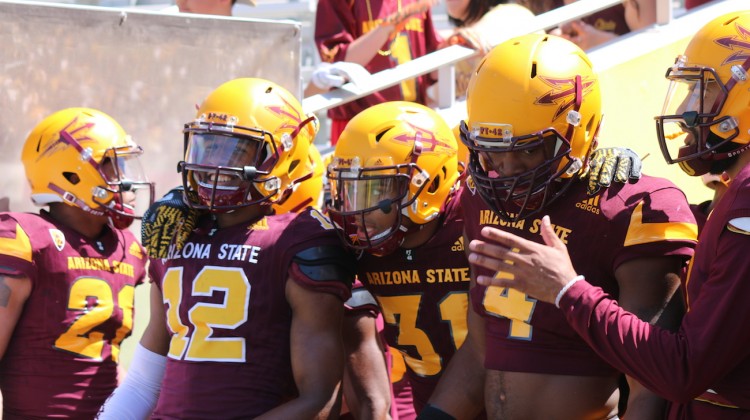 Arizona State began Fall Camp on Tuesday and already has two practices under its belt. This fall features a quarterback competition, a perhaps revamped offensive line and questions on defense — specifically in the secondary. Here are some of my impressions and observations from the first two days of practice.

Manny Wilkins and Blake Barnett will be a close race

During his preseason press conference last Thursday, coach Todd Graham said Wilkins is the starter until Barnett beats him out. Spring ball is a time for adjustment and experimentation, and Barnett probably used most of it to get accustomed to fresh faces and a new offensive system. I’m not sure if there was enough of an opportunity for Barnett to beat Wilkins out during the spring, but there certainly will be this fall. The two split first team reps on the first day of practice and are now officially going head to head.

My impression of Wilkins has always been his consistency. He completed 63 percent of his passes last season. He doesn’t throw the deep ball extremely well, but his athleticism and long strides give ASU another dimension. He made plays with his feet last year and the coaches have said he’s learned his lesson in terms of being aggressive and hurdling, and knowing when to just slide or go out of bounds. But last season, I felt we couldn’t knock a guy for giving his all. Sure, he needs to be smarter to protect himself. On the other hand, you could see how much the starting quarterback job meant to him by the way he played, and that’s respectable. Now, you can see how much it means to him to be a leader and continue maturing. Good on him.

Todd Graham said there were a few miscues, but the QBs looked good. He's pleased with their progression.

Barnett is a former 5-star recruit, but he didn’t look the part as much during the spring. I think he definitely has the arm talent, but it’s about fitting in the system and putting it all together. One thing that impresses me about him is whether it be on the field or even on social media, it seems his teammates have really taken to him. Being a transfer probably isn’t easy, but it seems the guys like Barnett. He almost won the starting job at Alabama, but Jalen Hurts won it and took the team to the national championship game. Regardless, Barnett was right there. Alabama isn’t known for great quarterback play, but being close to winning the starting job at a top program has to count for something, right? We’ll see if he wins it this fall.

Graham and Napier always talk about how the starting quarterback will be a guy the players take to and respect, and one who will win them football games. For what it’s worth, I think ASU will have two great options at quarterback, and as we saw last year, a team might need as many as three options.

The offensive line could end up being a positive

ASU’s offensive line gave up the most sacks in the Pac-12 last year. Not good. Injuries and missed time contributed to the unit’s down year, and it’s understandable why the offensive line was a concern heading into the spring. Now, left guard Sam Jones is a captain and there is a position battle for the starting center spot between A.J. McCollum and Tyler McClure. The pieces are fitting in around them, and things could be looking up.

Pro Football Focus grades players and gives them anywhere from 0-100. Jones and Quinn Bailey — the likely starting right tackle this year — were two of ASU’s top three graded returners. That’s a good sign. Following Tuesday’s practice, Jones said he felt this year’s offensive line was an improved one because of its depth and experience. He also said he feels there’s a new energy on the line, as there is with the entire team. Manny Wilkins said there’s a different “fierceness” to the line this year. Every team needs its offensive line, but it may be ASU’s lifeline this season. The Sun Devils feature great skill players (more on them below), but they can’t be effective without the blockers in front of them.

ASU is loaded at the skill positions

Question the secondary. Doubt the defense’s depth. There are concerns with ASU football this year. The skill players shouldn’t be one of your concerns, though. The Sun Devils will feature two senior running backs and a talented wide receiver group. Wilkins called it the deepest and most talented group of receivers ASU has had since he stepped on campus back in 2014. N’Keal Harry looks to have the talent and body of someone who will play on Sundays for a long time. He’s not the only one, though. John Humphrey hasn’t played in two years, but he’s well-known for his efforts on the scout team. In the spring game, Humphrey caught a few touchdowns. Humphrey and Ryan Newsome, another transfer receiver, are two players who will provide a speedy dimension. Additionally, they spent their off time helping the program’s recruiting efforts. Newsome once told me he’d never had a steak until hosting a recruit. Since then, he’s helped the program gain seven or eight commits.

QB Manny Wilkins said this year's team has the deepest and most talented WR group since he's been at ASU.

Don’t stop there, though. The tight ends should add a dynamic dimension, too. First-year offensive coordinator Billy Napier has talked about how the tight end will be the “jack of all trades” in his offense. I think Jay Jay Wilson can be that guy. He’s big, strong, athletic and his hands are solid, just based on the limited opportunity he received last season. Additionally, Tommy Hudson should be a player who factors in because ASU could use some two tight-end sets this season. This ASU offense should be able to score at least 30 points a game against most of its opponents.

The secondary’s improvement is TBD

ASU was ranked dead last in the country in pass defense last year. It wasn’t much better in 2015, either. In late May, top cornerback Kareem Orr announced he was transferring. Before that, safety Armand Perry announced he was retiring from football for medical reasons. All of that considered, it’s easy to see why this position group is the most concerning on the team.

Redshirt freshman Chase Lucas and senior Maurice Chandler seemed like the top returning corners, but we haven’t seen much of Chandler in the two-deep at practice yet. In fact, another player introduced himself. Joey Bryant. Who? He came to ASU on a track scholarship in fall 2016, but track wasn’t his goal. He didn’t want to high jump, long jump or triple jump for his entire college career. He wanted to play football. He told me he let the track coaches know he eventually wanted to play football, so they helped him get there. He showed the football coaches his junior college film from his two seasons Mt. San Antonio College, and they liked it. Now, he’s fighting for a scholarship.

.@NewBoi17 on Joseph Bryant: "He's probably the most athletically gifted DB we have."

ASU has other newcomers in the secondary, too. Freshman Alex Perry is a 4-star corner. Evan Fields and K.J. Jarrell are two guys who are 4-star talents, depending on the recruiting site. But the freshmen will be tricky. The staff should face a tough decision with them. On one hand, they could be good enough to play and contribute. But on the other, should they redshirt so they can make a bigger impact in the future? It’s a tough question. Don’t forget about returners Chad Adams and J’Marcus Rhodes, both of which can play safety. But I believe the freshmen could be talented enough to play this year.

Newsome and Humphrey both spoke to media after Wednesday’s practice and said they thought the secondary was much-improved from last season. Newsome said the defensive backs are more technically sound, which comes with experience, but also coaching. They both thought the defensive backs were going to surprise a lot of people this year. ASU will need it.

First-year defensive coordinator Phil Bennett markets himself as old-school, which I think is good. Throughout the spring and the first couple days of the fall, we’ve heard him chew players out and get in players’ faces. I think it’s a nice change to have that voice around a defense that has struggled so much over the past two seasons. After the spring game, Bennett said he’d been at places where the journey of turning around a defense would be too tough. He said Tempe wasn’t one of them.

He’ll have a few key pieces to work with, but this doesn’t project as a deep defense unless there are surprises. The defensive line took a step back last year, but returns guys like JoJo Wicker and Tashon Smallwood. Renell Wren looks as if he could make an impact, and coach Todd Graham seemed to be high on freshman Tyler Johnson, a local kid from Highland High School. I don’t think fans should be worried about the defensive line, but the depth at linebacker could be a bit suspect.

D.J. Calhoun, Christian Sam and Koron Crump is a great linebacker corps if they’re all healthy. Marcus Ball (SPUR LB/DB hybrid) had a great year in 2016 and could do so this season. Behind them, guys like Khaylan Thomas and Parker Higgins are fighting to make an impact. I think if one of them can perform this year — my pick is Thomas — then ASU will be set in its front seven. We discussed the secondary in the previous point, but I’m not sure what to think about them. I believe there is a lot of opportunity there for newcomers, but who will stand out? Depth is only good if it’s quality depth.

The offense has a chance to really be electric this season, so if the defense can hold opposing teams to 30 points or less, I think the Sun Devils have a shot to be better than fifth place in the Pac-12 South (their projection in the preseason media poll). The defense has a lot of questions to answer, but I believe there are possible solutions.