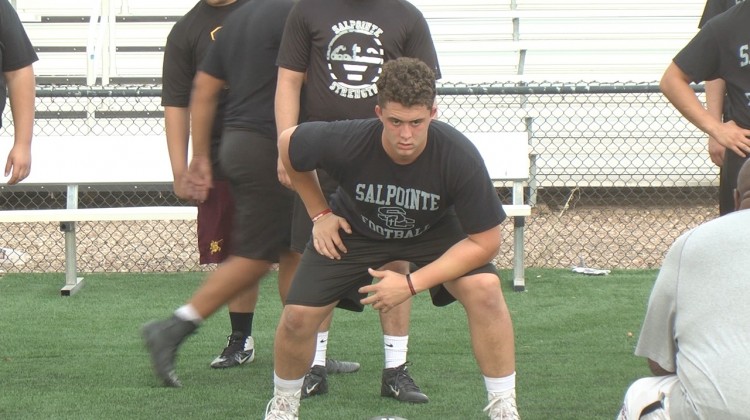 The Chandler pair of Chris Manoa and Bryce Jackson committing to UNLV set off a chain reaction as four more Arizona prospects made their verbal pledge in the hours and days after Manoa and Jackson.

Chandler teammate Brayden Flynn followed with a commitment to Navy after unofficially visiting the school. He picks the Midshipmen over offers from NAU and Idaho.

“It was a huge honor for me to be offered by Navy,” Flynn said. “I was looking more into my future and the benefits of going to Navy. It’s pretty much close to impossible to turn down what they offer. They run a 3-4 defense and [blitz a lot] from outside linebacker. They recruited me a lot from that position.”

“I have military background,” he said. “[My] dad was in the Marines, my uncle was in the Navy, and [had] an uncle in the Air Force.”

Fresh off a state championship and a junior year in which he threw for 2,291 yards and 30 touchdowns while rushing for 1,012 yards and 12 more scores, Saguaro quarterback Max Massingale committed to Air Force over offers from Army, Navy and Campbell.

Massingale comments, “I thought Air Force balanced out the pass and run better than the other academies. I’m a throw first quarterback but I will use my legs to bail me out of tough situations.  I also really love Colorado Springs, it is really a beautiful place to live.”

His dual-threat capabilities really intrigued the Air Force staff. He says, “They like how I can keep a healthy balance of running and throwing. They are very confident in both of those aspects of my game.”

Committing to Air Force or any other service academy goes beyond four to five years of football; each player must serve the country after his football career is over. This didn’t sway Massingale one bit. He comments, “My grandpa and his brother both fought in Korea. But other than that I have no military in my family,” he explained. “The whole military aspect of it more excites me than concerns me. I want to fly planes. My favorite movie is Top Gun. I really have the need for speed. I want to keep myself in the action at all times even after football. This heavily swayed my decision in choosing Air Force.”

The NCAA passed a new rule allowing a new early December signing date, this also didn’t affect Max. “I just knew where I wanted to be. The early signing period didn’t influence me. I have already taken two visits to Air Force and loved them both. And with their offense it really is going to put me in the best position to succeed.”

“I love the location and it’s the Air Force!” Golden said in a message. “What’s better than the Armed Forces? I come from a family of people who have served! My father is a retired marine and the military is in my blood.”

At one point, it seemed that Oregon lead for Salpointe offensive tackle Matteo Mele but another Northwest program landed his services when he committed to Washington on Monday evening.

Fresh off an unofficial visit to UW, Mele says, “UW has always been at the top of my list since their offer and on my visit getting to know the coaches and see the campus and their overall culture I just fell in love with the program.”

Offensive line coach, Scott Huff, is an Arizona native, having played at Horizon and was Mele’s main recruiter. That relationship was huge for Mele. He states, “Coach Huff was a large part of my decision. Of course, having a great relationship with your position coach is huge and he is a great guy and an amazing coach. He really likes my athleticism, versatility and the attitude that I play with.”

Mele is new to the offensive line. He was an all-league tight end last year for Salpointe. He says his transition to his new position is going smooth. “The transition from TE to tackle is going really well,” he says. “I’m getting better everyday and excited to put some pads on.”

NFL Admits They Were Wrong on Racial Justice and Protesting - https://t.co/FRtVCOo963 via @sports360az
View on Twitter
1
5