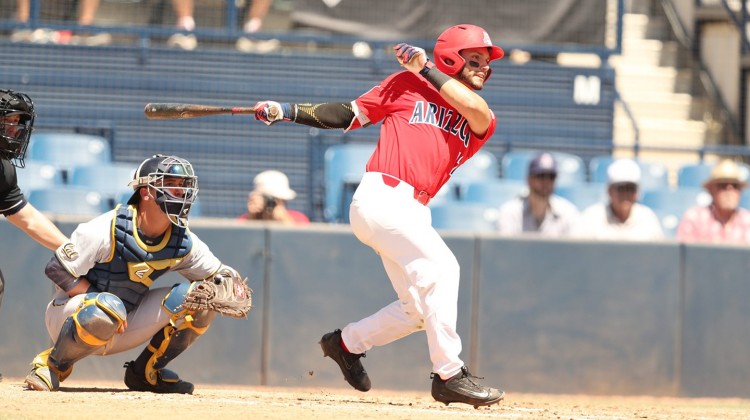 The college baseball regular season has wrapped up and NCAA Regionals are underway. ASU did not make a regional for the first time since 1999, not including the 2012 postseason ban. The Sun Devils finished the season 23-32 overall and 8-22 Pac-12, the worst finish ever for ASU. Arizona is one of four teams from the Pac-12 in a regional. The Wildcats finished 37-19 overall and 16-14 Pac-12.

With the opening rounds of regional play complete, here’s what to know as the first weekend on the road to Omaha continues.

It was a postseason rivalry renewed on Friday as Arizona took on Sam Houston State in postseason play for the second consecutive year. Last year, the Wildcats took two close ones from the Bearkats in the Lafayette regional, executing clutch plays and hits at just the right time to overcome Sam Houston. This year however, the Bearkats found their rhythm taking game one 5-4, forcing Arizona into the loser’s bracket for day two.

JC Cloney started for Arizona. Cloney went seven innings allowing four earned runs on ten hits with five strikeouts. Sophomore Michael Flynn came in to relieve Cloney in the eighth and had two outstanding shut out innings allowing no hits with three strikeouts. Arizona only using two pitchers in game one is huge for this team moving forward. The Wildcats have struggled a bit with their depth in the bullpen this season.

In the third inning on Friday night, the Wildcats thought they had edged ahead of the Bearkats when Louis Boyd appeared to come home on a wild pitch. The run did not end up counting after the umpires met to discuss the play. Arizona cleared up the call on Twitter:

Clarifying the 3rd inning. Oliva was hit by the pitch on the strike 3, making it a dead ball. Both runners had to go back to original base.

Texas Tech, beat Delaware 5-2 on Friday. The Red Raiders have the best pitching in this regional with an overall solid pitching staff and a strong defense to back them up. If the Wildcats can steer the ship back in the right direction to meet the the Red Raiders, Tech will surely give them some trouble.

Arizona will take on Delaware in an elimination game on Saturday at 12:00 MST.

The Stanford regional got underway on Thursday with BYU versus Cal State Fullerton kicking things off. Fullerton took game one, 13-2 against BYU. Game two featured Stanford versus Sacramento State. The Cardinal shut out the Hornets 10-0. On Friday, Stanford took on Fullerton in the winner’s bracket in round two.

Fullerton has a solid defense and depth in their pitching staff. Timely hits and a strong outing from starter John Gavin helped the Titans take down the Cardinal 4-1. Gavin went seven innings allowing only one run on three hitswith 10 strikeouts.

Last time that happened, we won the next 11. Just sayin

BYU eliminated Sacramento State on Friday with a 6-1 win. Stanford will look to keep their tournament contention alive on Saturday against BYU at 1:00 MST. If Stanford wins, they’ll have to play Fullerton again at 6:00 MST. The Cardinal will have to beat the Titans twice to advance to a Super Regional.

UCLA was one of the last teams to get into the tournament. The Bruins are in Long Beach playing in one of the most competitive brackets of the entire field. On Friday, the Bruins put up a battle against Texas, but fell short 3-2.

Bruin ace Griffin Canning went seven 2/3 innings, allowing two earned runs on six hits with two walks and six strikeouts. Canning going deep into that game will benefit UCLA’s pitching staff by saving some arms for if they make it further into the weekend.

Errors plagued the Bruins in the seventh inning as the Longhorns were able to get on base due to some defensive miscues and then bring the runners home to extend their lead, 2-1.

UCLA fought until the end, with a couple big hits coming in the ninth inning to put the Bruins within one, but it wasn’t enough.

Jack Stronach hits a RBI-single up the middle to plate Michael Toglia!

This regional boasts one of the top pitching staffs in the country in Long Beach State, and a great offense in San Diego State. Texas has a solid defense and some big bats that helped them to stay ahead against UCLA.

The Bruins showed against the Longhorns that they won’t go down easily, but if they want to stay in this they’ll have to make the necessary adjustments on defense to slow down SDSU’s potent offense on Saturday.

UCLA will look to bounce back from its tough opening round loss and stay alive against San Diego State at 1:00 MST.

Oregon State is the clear favorite in this tournament. On Friday the Beavers reached 50 wins for the 2017 season with an 8-2 win against Holy Cross. The Crusaders kept it close through six staying within one run until the Beavers broke away in the seventh. Jake Thompson, a huge contributor to the OSU pitching staff this season, had yet another impressive performance on the mound extending his undefeated record to 13-0. Oregon State’s pitching is sure to carry them through this tournament as it has all season.

A further look at tonight's win over Holy Cross. pic.twitter.com/IxRmMQRUd7

Yale beat Nebraska 5-1 in game two to move on to the winner’s bracket. Oregon State will matchup against Yale on Saturday at 7:00 MST.

The @Suns are on the rise & this season is just the beginning 🏀🔥
https://t.co/PvyLRzDrgQ
View on Twitter
2
8

Walden Grove (Blk) vs Buena High (BL) 154lbs Varsity. My Freshman journey has been a long hard road but I will never back down from the best. @Grove_Wrestling @CoachNobleWGHS @WaldenGroveHS @Sports360AZ @5Sportstalk @HSTucson @AZPreps365 https://t.co/fmbXH1oNEF
View on Twitter
2
14