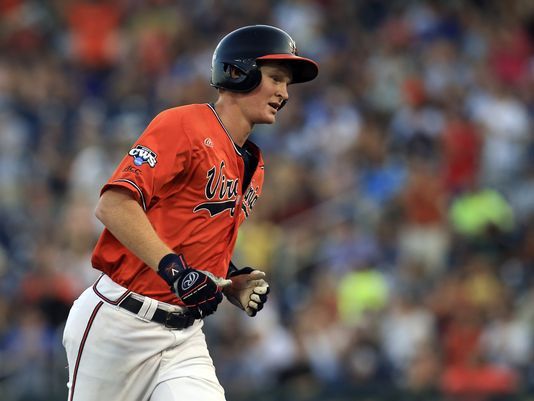 With the seventh overall pick in the 2017 MLB Draft, the Arizona Diamondbacks selected infielder Pavin Smith out of the University of Virginia.

“I couldn’t ask for a better situation,” Smith said. “It’s such a surreal feeling. I really can’t wait to get started and play some baseball.”

Smith was ranked by Baseball America as the seventh-best prospect in the 2017 class. Mock drafts leading up to round one on Monday had a variety of predictions, so Smith wasn’t sure what to expect.

“It didn’t hit me until about an hour before,” Smith said. “Everybody’s latest mock drafts had me going different places. You try not to look into that, but it does get you sometimes.”

Out of high school, Smith was drafted by the Colorado Rockies in the 32nd round. He decided to pass on the initial opportunity to go pro in order to play baseball while furthering his education.

“I think Virginia prepared me to the max,” Smith said. “Having to deal with adversity there…dealing with school and having to balance that with baseball, that can be tough sometimes. I think it really just matured me as a man.”

During his time at Virginia, Smith batted at .325 and had 28 career home runs, with 178 RBIs, the second most in school history.

As a freshman, in the decisive game three of the 2015 College World Series against Vanderbilt, Smith had the game-tying two-run home run and a go-ahead single to help lead Virginia to it’s first CWS title.

Anyone looking for a big bat in the #MLBDraft?

After his freshman season, Smith had Tommy John surgery on his left elbow, but was ready in time for his sophomore year. That season, Smith had 16 doubles, eight home runs and 57 RBIs, which was seventh in the ACC.

Throughout his career at Virginia, Smith played both infield and outfield for the Cavaliers. In 2015, his playing time was split between the two positions and this past season he played in left when Adam Haseley, who was drafted No. 8 by the Phillies, was pitching.

“I’m pretty comfortable out there (in the outfield)” Smith said. “I think that was one of the reasons I was selected because they saw that I can do well out there.”

Smith has been compared to San Francisco’s Brandon Belt because of his talent in the box, but he feels his abilities are unique to him.

“I try to think of myself as my own player,” Smith said. “Just go out there and do what I do and try to play for the Lord and everything will fall into place.”