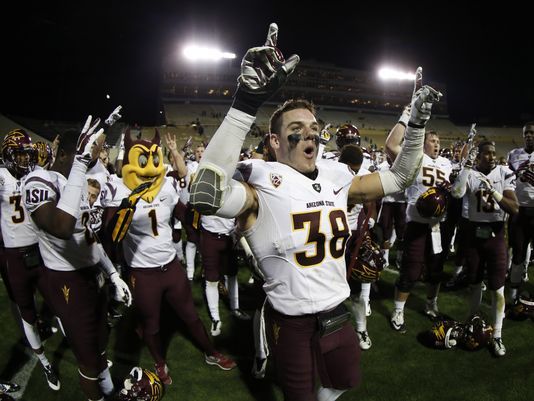 Jordan Simone was at his lowest point.

He tore his ACL with three games left in his redshirt senior season, a brutally disappointing end to his Arizona State career. But that wasn’t the biggest blow. After tearing his ACL, the safety was well on the road to recovery before he suffered another setback.

Simone had been training and rehabbing for eight months. He had been cleared to run straight forward for two months and his doctor just cleared him to cut. Then, while he was training one day, he was pushed back to square one.

“I burst out straight forward and once I hit 10 yards, I heard a pop in my kneecap,” Simone said in a phone interview with Sports360AZ’s Brad Cesmat on Tuesday. “So I was like, ‘Aw jeez, I got to start all over again.’ Pretty much, I kind of hit my rock bottom with the injury, I was working so hard to get back…I didn’t know if I’d ever play again.”

Following the broken kneecap, Simone said he had to look himself in the mirror because he didn’t know if he still wanted to play football and pursue his dream of making the NFL.  After all, he had been thrust in the real world after finishing college as he was working a job as a medical salesman for the doctor who performed his ACL surgery.

He will now get to validate that thought. Simone announced via Twitter on April 29 — the third and final day of the NFL Draft —  that he was going to be given an opportunity to play with the Seattle Seahawks.

Happy to announce that I’m 100% healthy and have been given an opportunity to play with my hometown team, the Seattle Seahawks.

Simone said he met the Seahawks coaches and scouts last year when the team brought back hometown players for an event similar to a college pro day. It was there that a connection was built.

ASU held its pro day in mid-February. Kicker Zane Gonzalez and wide receiver Tim White highlighted the group of Sun Devils looking to woo scouts, but one former Sun Devil was off to the side doing the same.

Simone attended ASU pro day and saw one of the Seahawks scouts he had met last year. The scout told Simone the team may want to have him be a part of its minicamp and texted him the day after to tell him the team was still interested. After the NFL Draft concluded, Simone received the official call inviting him to next weekend’s Seattle Seahawks minicamp.

He said he had a great support system of family and friends he counted on when he experienced his biggest low. If they hadn’t helped him up, he may have never received the opportunity to fulfill a lifelong dream of playing in the NFL.

“(Former ASU quarterback) Mike Bercovici obviously is my very best friend and was there for me anytime and was always looking out for me,” he said. “My parents were always there trying to say, ‘You got to try and play buddy, you’re going to regret it if you don’t.’”

Simone is no stranger to earning his keep. He joined ASU’s football in 2013 team as a walk-on, but that never deterred him. He earned a scholarship before the 2014 season, solidified the starting safety job in the third game of the year and ended the campaign with All-Pac-12 honors.

After a surprising emergence, Simone was a team captain during his redshirt senior season and in late October was named a semifinalist for the Jim Thorpe Award, which is given to the nation’s best defensive back. Since then, he has suffered two debilitating injuries.

However, those setbacks and experiencing rock bottom may have prepared him for the upcoming journey unlike anything else.

“I think in life, and I think many people can agree with this, when you get kicked to the dirt and you stand up, you feel like you stand 10 feet higher because of what you went through,” Simone said. “These injuries have helped me mature as a man.

“I would love to play football for the rest of my life.”