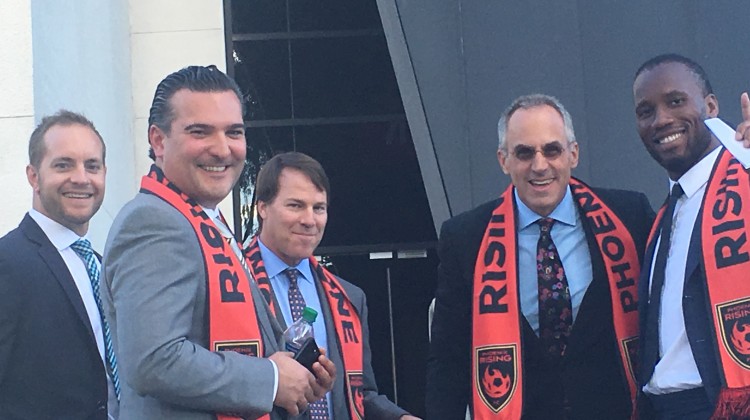 Officials from Phoenix Rising Football Club and local leaders hosted Major League Soccer (MLS) President and Deputy Commissioner, Mark Abbott, and other executives Tuesday in the Valley. The purpose of the visit was for Phoenix Rising FC leaders to update MLS on its current bid for MLS’ next expansion (scheduled for 2020). Phoenix Rising FC submitted its formal proposal for MLS expansion in January.

“We believe our MLS Expansion Franchise bid is one of the strongest in the country,” said Phoenix Rising FC Governor Berke Bakay. “Today, we enjoyed having an opportunity to show our guests from MLS the incredible growth and beauty in greater Phoenix, its vibrant soccer community and the numerous accomplishments achieved by Phoenix Rising FC since we last met with MLS in mid-January. I think it is now clear, Phoenix Rising is ready for MLS.”

“Today was a great opportunity to meet with members of the community, government officials, the Salt River Pima-Maricopa Indian Community and Arizona State University,” said MLS Deputy Commissioner Mark Abbott. “We were particularly impressed with the progress Phoenix Rising has made in a short period of time, and the fan base they have developed. We look forward to continuing our discussions with Phoenix Rising as our expansion selection process continues.”

MLS intends to name two expansion cities in 2017 and two expansion clubs at a later date. When the final announcements will be made has not yet been announced.